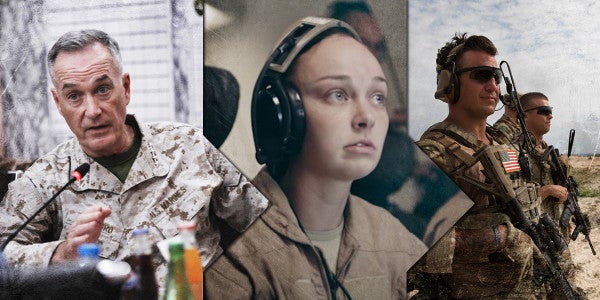 “We have to be discriminate, we have to be proportionate, it must be necessary,” Work continues. “And on the 17th of March, some atrocity happened, and God’s going to judge me too someday … What I’m telling you is that there’s no guarantee this is going to go their way or our way. We have a mission.”

The first two episodes of the eight-hour series, which Task & Purpose screened ahead of the premiere, are laced with moments like this: commanders and their troops, linked by sprawling formations of laptops, holding tablets and manning phones, while they coordinate air strikes and monitor suspected enemy combatants. As the series’ narrator, actor Chris Evans — yes, Captain America — points out frequently: “This is what war looks like for .”

Chain of Command covers ongoing operations in Iraq, Afghanistan, Somalia, Niger, South Africa, and… Trinidad and Tobago, some 1,600 miles from the U.S. coast, where the Islamic State has found a potential recruiting ground.

For avid consumers of Iraq and Afghanistan war documentaries, especially veterans of those wars, the early episodes of Chain of Command may disappoint: They don’t capture moments of frenetic combat in places like Fallujah, Marjah, and Korengal. Theycapture the deliberate, complicated, compartmentalized opening of a new stage in an aging war, one in which the U.S. military isn’t leading the charge — but its members are still shouldering immense risks.