When I ask Korean War veteran Juan Balleza about what he thinks of the wars in Iraq and Afghanistan, there’s... 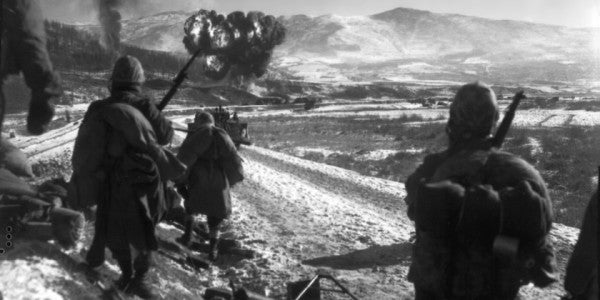 When I ask Korean War veteran Juan Balleza about what he thinks of the wars in Iraq and Afghanistan, there’s a heavy sigh on the other end of the line. He tells me that he’s followed the wars closely, on the news and in the movies. He marvels at the amount of equipment soldiers have to carry these days, and the power and accuracy of their weapons.

Then, after a long pause, Balleza says, “I don’t think I could survive that type of fighting. It’s got be very stressful.”

That’s not the response I’m expecting. Balleza was a Marine. He fought in the Chosin Reservoir, in one of the bloodiest battles in U.S. military history, and he did it on an empty stomach, and with no body armor, and in subzero temperatures. Give him an M4 and some night-vision goggles and the guy could survive anything, because for 17 days in the winter of 1950 he survived everything.

But Balleza doesn’t see it that way. He was lucky, that’s all.

“I came back with all my fingers, all my toes,” he says. “No frost bite. Just the experience of having survived battles, and people trying to kill me, and me killing them.”

A column of the U.S. 1st Marine Division move through Chinese lines during their breakout from the Chosin ReservoirPhoto via Wikimedia Commons

Balleza is one of a handful of Korean War veterans who appear in PBS’s new documentary, “The Battle of Chosin,” a comprehensive blow-by-blow of the infamous 17-day battle, which pitted two of the world’s most powerful militaries against each other under some of the world’s most extreme conditions. It’s a story of extraordinary hardship, and, at its most visceral, a meditation on the impact of combat on the mind and soul.

“You’re not the same person,” says one Chosin veteran, who describes beating a group of wounded Chinese prisoners with his rifle. “You’re a different person. You’re just something that you never thought you’d be.”

The film is also a history lesson. Korea is often called the “forgotten war,” but it was only buried, like a traumatic memory — the moment it became painfully obvious that we weren’t the invincible superpower we thought we were after World War II. And we’re still reeling from it. If there’s one clear takeaway from this film, it’s that the Battle of Chosin permanently altered America’s footing in the world.

To drive that point home, “The Battle of Chosin” features a number of illuminating interviews with experts and historians. But, really, it’s Balleza’s story and the stories of the other veterans who fought in the reservoir that do the most to capture the magnitude of the battle, and then to help us, the audience, make better sense of its legacy.

Balleza grew up in San Antonio and joined the Marine Corps Reserve in 1948 at the age of 17. In May 1950, he graduated high school. The war started in June. His outfit was called to active duty in July. Two months later, he was carrying a Browning Automatic Rifle in the embattled streets of Seoul, South Korea.

“I was pretty salty by that point,” Balleza told Task & Purpose. “But I didn’t realize the danger that was up the road at the Chosin Reservoir.”

The orders came in early November: Balleza’s unit, the 7th Marine Regiment, would head north into the mountains en route to the Chinese border with the rest of Maj. Gen. Oliver P. Smith’s 1st Marine Division to crush the remnants of the North Korean military on its home turf. Gen. Douglas MacArthur was then the commander of all United Nations’ forces in Korea. By his estimation, the war was almost won.

That was, of course, a gross miscalculation. The worst had yet to come. As MacArthur’s forces advanced toward what was expected to be a swift and relatively painless victory, Mao Zedong was quietly preparing the Chinese military to enter the fight from the other side of the border.

It began on the night of Nov. 27 with a surprise attack. Approximately 120,000 Chinese troops charged into the American encampments on both sides of the Chosin Reservoir, outnumbering Smith’s forces about four to one. “It was just one solid field of fire as they came down,” a Marine veteran recalls in the documentary.

The opposing armies clashed in the dark. Rifles became clubs. Bayonets were fixed. Men were shot at pointblank range. The fight raged until dawn.

Then, just as suddenly as they had arrived, the Chinese troops vanished. It was a ploy: Mao’s strategy was to lure MacArthur’s forces deeper into North Korea, where mountain passes provided minimal cover and temperatures remained around 30 below zero, so they could be surrounded and slaughtered. MacArthur, thinking the Chinese were on the run, took the bait.

The Battle Of Chosin Reservoir is the 17-day bloodbath that followed. As American casualties surged, a “fighting withdrawal” southward was initiated, but Mao had the 1st Marine Division in his crosshairs. He wanted to annihilate it. In the documentary, veterans describe a desperate scramble for survival — an every-man-for-himself scenario that saw droves of wounded Americans left for dead and, ultimately, the entire U.N. contingent driven below the 38th parallel never to return.

For the United States, the defeat has served as an enduring wake-up call.

“You had fundamental changes in American history,” explains historian Bruce Cumings. “That built the national security state, built military bases abroad, a large standing Army for the first time in US history. And all of that transpired in December 1950 courtesy of the Chinese intervention.”

Balleza left Korea in February 1951. He’s not bitter — not toward MacArthur for mismanaging the war, not toward the North Koreans for starting it, and not toward the Chinese troops he faced in combat. “I’ve said and I’ll say it again,” he said. “If I were to meet a Chinese soldier who was up there when I was, I’d hug him like a brother, because I know that he suffered the same things that I did.”

Wounded Marines evacuated by a HO3S-1 helicopter from VMO-6.Photo via Wikimedia Commons

Time is funny like that. It helps us see the positives in situations that were once insufferable. But Balleza isn’t just being nostalgic. When, like many of the other veterans interviewed in the documentary, Balleza looks back at the battle of the Chosin Reservoir, the tragedy of that experience is largely eclipsed by all the good that followed. The way he sees it, Korea was a victory. The evidence is everywhere.

“South Korea is one of the strongest economic nations in the world,” he said. “Just look at all of the Korean products around. It’s incredible. It makes me feel good that the friends of mine who did not make it back, they did not die in vain. The Koreans have really paid for the sacrifice of so many American military men.”

“The Battle of Chosin” was produced and directed by Randall MacLowry. The film, which is part of the American Experience series, premieres Nov. 1 on PBS.