How The Korean War Started 65 Years Ago 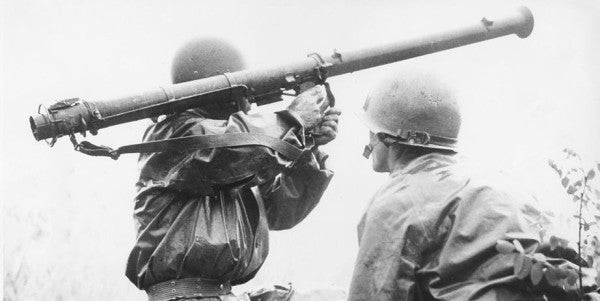 On the night of June 30, 1950, Lt. Col. Charles B. Smith was asleep in his quarters at Camp Woods near Kumamoto, Japan, when he received a phone call. “The lid has blown off. Get on your clothes and report to the CP,” his commanding officer told him. This began the deployment of Task Force Smith, the first American combat troops to arrive and fight in the Korean War.

Following years of border skirmishes that left thousands dead on both sides, the North Koreans launched a full-scale invasion against the south on June 25, 1950. The North Korean army was well-trained and well-equipped with the latest Soviet tanks and artillery. It was Soviet leader Josef Stalin himself who reluctantly gave the go ahead to North Korean dictator Kim Il-Sung to invade.

The South Koreans were in no position to effectively resist. They had no tanks, little artillery, a minuscule air force and were demoralized after bloodily crushing a series of domestic uprisings. Though the U.S. had largely exited the south by the outbreak of the war, the Soviet Union had built North Korea’s army into a fearsome instrument.

With just six C-54 transport planes available for airlift, Smith was only able to take two understrength infantry companies with a skeleton headquarters and a weapons platoon with a few mortars, obsolete bazookas and 75mm recoilless rifles. In all, they comprised little more than 400 men. They landed in Pusan, South Korea, on the morning of July 1 and took a scratch collection of Korean trucks and civilian automobiles to the train station. Once there, Smith was told by a general: “All we need is some men out there who won’t run when they see tanks.”

On the train ride heading north, they had a front row seat to the chaos and confusion in the face of the invasion. Four Royal Australian Air Force fighters strafed an ammunition train heading north to resupply South Korean soldiers, blowing it sky high and killing many local civilians. In another incident, friendly planes destroyed a column of 30 South Korean trucks, killing over 200 soldiers. One officer present observed: “The fly boys really had a field day! They hit friendly ammo dumps, gas dumps, the Suwon air strip, trains, motor columns, and KA [Korean Army] Hq.”

After linking up with a battery of 105mm artillery that had just arrived by sea, Task Force Smith headed north of Osan on July 4 to scout out positions for the coming battle. Their mission was simple: Delay the North Korean advance as long as they could. They could see South Korean engineers wiring bridges for demolition along the way.

On July 5 at 7 a.m., with the soldiers dug and the artillery positioned, they spotted a column of North Korean tanks. Artillery called in against them proved ineffective, and despite waiting until the T-34 tanks were at close range, the 75mm recoilless rifles couldn’t penetrate their armor. A flurry of bazooka shots failed to penetrate as well. Anti-tank mines tailored for the situation were not available in Korea.

The artillery only had six anti-tank rounds, and it was these that disabled two enemy tanks. The armor came in waves, barely stopping to engage the U.S. infantry as they drove south. After they passed, Task Force Smith knew that enemy infantry was on the way.

The approaching column of trucks was estimated by Smith to be six miles long, with three tanks taking the lead. When they were within a thousand yards the Americans raked the column with .50 caliber machine guns, mortars, and artillery. Many trucks were destroyed, and enemy infantry dismounted and proceeded to engage in a double envelopment maneuver. Like the tank columns before them, they seemed more concerned with going around the task force than engaging it.

By 2:30 p.m., with large numbers of the enemy on his flanks and in his rear, Smith decided if any of his men were going to get out, it would have to be then. Elements leapfrogged back, abandoning their heavy weapons, their dead, and some of the more seriously wounded. A medical sergeant volunteered to stay behind with them. The artillery spiked their guns upon receiving the word to withdraw.

Task Force Smith suffered its heaviest casualties during the retreat, with enemy machine gun positions hitting them from close range. Elements straggled back into Osan piecemeal, with some scattered men walking all the way to the Yellow Sea and the Sea of Japan. One man arrived at the Pusan perimeter by Saipan from the west coast. In all, Task Force Smith suffered 42 killed and 85 wounded.

Over time, Task Force Smith became a cautionary tale, to the point that upon becoming Army chief of staff in 1991, Gen. Gordon Sullivan said, “My theme as Chief of Staff is ‘No more Task Force Smiths.’” After World War II, cutbacks left American troops poorly trained, under equipped, and often badly understrength. The Army was unprepared for Korea, and the soldiers paid the price.

Stalin had resisted the idea of the North invading the South for years out of fear of American intervention, but with the U.S. withdrawal starting in 1948, the situation seemed changed. Stalin, Communist Chinese Premier Mao Zedong, and Kim Il-Sung assumed that the United States would not get directly involved. Stalin was no stranger to this kind of miscalculation. His misreading of his erstwhile ally Adolf Hitler led to one of the greatest geopolitical disasters of the 20th century.

There was little to disabuse the troika of this notion. In January 1950, a mere six months before the war, Secretary of State Dean Acheson had left South Korea out of the U.S.’s Pacific defense strategy in a speech to the National Press Club. The communists interpreted this doctrine as a “green light” for invasion, and anticipated a quick victory. They were badly mistaken.

The overwhelming strategic concern — far exceeding the fate of a relative backwater like Korea — lay less than six hundred miles off the Korean coast: Japan. Under U.S. occupation and still rebuilding from the terrible destruction of World War II, Japan was vital to U.S. military power in the Pacific. If South Korea fell, Japan would face a grave threat leaving U.S.’s Pacific defense strategy in ruins.

After American and U.N. reinforcements arrived, a counteroffensive drove the North Korean military to the brink of collapse. When U.N. forces approached the Yalu River, China entered the war. Its assault sent the UN armies reeling back past the 38th parallel, and a war that seemed would be over by Christmas turned into years of bloody stalemate.

Though ceasefire talks had begun in July 1951, the war dragged on. President Dwight D. Eisenhower, newly elected in 1952, decided after visiting Korea that it was time to apply enough pressure to force a peace. He began broadly hinting in public statements that nuclear weapons might be used if a ceasefire was not concluded.

Despite the nuclear blackmail, the death of Stalin in March 1953 and the resulting leadership shake up in the Soviet Union was probably the decisive factor in ending the war.The carnage finally ended with the Korean Armistice Agreement on July 27, 1953. A demilitarized zone was established separating the two countries along the 38th parallel that stands to this day.

It has often been labeled the “Forgotten War,” but over 36,000 Americans and millions of Koreans and Chinese died in a conflict noted for its utter brutality. Between U.S. strategic bombing leveling most of North Korea, horrific war crimes committed by both sides, and cities changing hands multiple times, both North and South Korea were devastated. It ended in a draw. But if satellite imagery has anything to say, South Korea in the long run is lucky that the United States had its back.