UNSUNG HEROES: The Next Medal Of Honor Recipient Who Tackled A Suicide Bomber To Save His Men

As part of Task Force Mountain Warrior Personal Security Detachment, Capt. Florent Groberg was in charge of a team of... 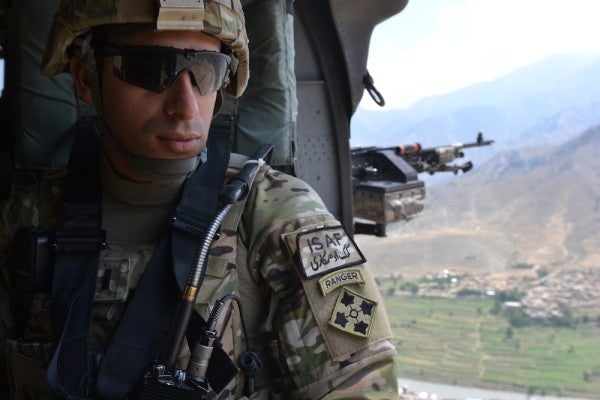 As part of Task Force Mountain Warrior Personal Security Detachment, Capt. Florent Groberg was in charge of a team of six men whose job was to protect Col. James Mingus, brigadier commander of 4,000 men deployed to Afghanistan from his unit, the 4th Infantry Division’s 4th Brigade.

On Aug. 8, 2012, Groberg’s team was set to escort Mingus. That morning, the patrol left headquarters in Jalalabad for a meeting with the provincial governor in Asadabad.

A thousand meters out, nearby the patrol, was a man wearing a suicide vest. When Groberg realized what was about to happen, he and Sgt. Andrew Mahoney tackled the man to the ground in hopes of protecting the soldiers on patrol.

“I felt and noticed there was a guy to my left, out of nowhere, I hadn’t seen him,” Groberg told Army Times. “At that moment, I reacted to him, and I left my position and went at him.”

Four of his fellow patrol members died, and 16 were injured in the initial blast. A second explosion also went off from a subsequent suicide bomber who detonated his vest prematurely.

The explosion threw Groberg back 15 to 20 feet and knocked him unconscious. When he came to, he saw his left leg was severely injured.

“I couldn’t find my rifle, so I took my pistol out, and I made sure I had a round in there,” Groberg told Army Times. “I figured, all right, I must have stepped on an IED, because I couldn’t remember anything. I must be in the kill zone, and they’re probably going to follow up with small-arms fire.”

Groberg was dragged to safety by his platoon sergeant and received medical attention shortly thereafter.

After three years at Walter Reed National Military Medical Center and 30 surgeries, Groberg is medically retired. Though he had hoped to continue a career in the Army, his inability to run has led him to serve in a different capacity: as a civilian employee of the Defense Department.

On Sept. 21, President Obama called Groberg to tell him he would receiving the Medal of Honor.

“It was an honor to speak to the president on that day. It is not every day that one of the most powerful and influential figures in the world calls your cellphone,” Groberg said. “I have tremendous respect for who the president is as a person, and I definitely will never forget the call.”

Watch Groberg recount meeting the families of the soldiers who lost their lives the day he earned the Medal of Honor.

Groberg’s reaction to the award has been one of mixed feelings. He has said that his goal is to tell a story about the men who were lost that day, men that were “true heroes in this case, individuals who gave it all.”

Groberg added, “This medal belongs to them. It is my mission to tell everyone,” regarding Command Sgt. Maj. Kevin J. Griffin, the brigade’s senior enlisted soldier; Maj. Thomas E. Kennedy, the brigade’s fire support coordinator; Air Force Maj. Walter D. Gray, of the 13th Air Support Operations Squadron; and Ragaei Abdelfattah, who was serving his second voluntary tour with the U.S. Agency for International Development.

During a ceremony on Apr. 22 at Fort Carson, Colorado, Mahoney was awarded the Silver Star, the nation’s third-highest award for valor, for his role in helping to tackle the bomber.

Groberg was born in Poissy, France, in 1983 and became a naturalized U.S. citizen in 2001. After graduating college from the University of Maryland College Park, he entered the Army in July 2008 and attended Officer Candidate School at Fort Benning, Georgia. He received his commission as an infantry officer in December 2008.