With a little witty repartee over the radio, the Allies first major offensive in the Pacific during World War II... 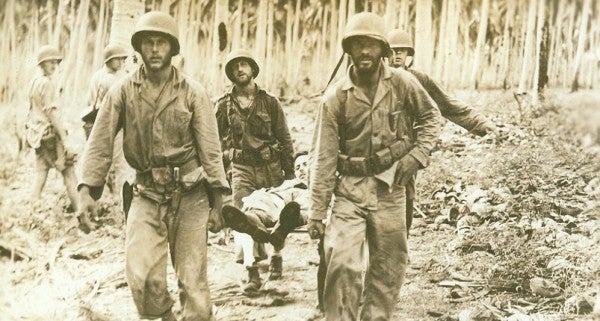 With a little witty repartee over the radio, the Allies first major offensive in the Pacific during World War II came to a close as American forces secured Guadalcanal on Feb. 9, 1943.

“Total and complete defeat of Japanese forces on Guadalcanal effected 1625 today . . . Am happy to report this kind of compliance with your orders . . . because Tokyo Express no longer has terminus on Guadalcanal,” read the radio dispatch from Maj. Gen. Alexander McCarrell Patch to Adm. William Halsey, according to the Army.

The response from South Pacific Headquarters was fittingly optimistic:

“When I sent a Patch to act as tailor for Guadalcanal, I did not expect him to remove the enemy's pants and sew it on so quickly . . . Thanks and congratulations.''

Guadalcanal, the largest of the Solomon Islands, had incredible strategic value to both the Empire of Japan and the Allies.

The Japanese were rapidly building an air strip, and if they maintained control of the island, they would have unfettered access to the sea route between the U.S. and Australia. If the Americans controlled the island, they would be better positioned to support Australia, which could be used as a springboard for an invasion of mainland Japan.

According to History.com, on Aug. 7, 1942, U.S. Marines launched a major offensive to take the island, immediately encountering fierce and sustained resistance. Facing an entrenched and determined enemy, the ensuing battle was brutal, made worse by the sweltering jungle heat, rugged terrain, and shortage of supplies.

As Japanese and American forces engaged in unforgiving jungle warfare on the largest of the Solomon Islands, their navies fought six major engagements between Aug. 24 and Nov. 24 of that year, resulting in the loss of numerous warships, aircraft, and of course, lives on both sides.

On Dec. 31, 1942, Emperor Hirohito told Japanese troops they could withdraw from the area, and U.S. forces took control of the island five weeks later.

Out of the victory at Guadalcanal came two of the Marine Corps most renowned figures, John Basilone, who received the Medal of Honor for running ammunition through contested lines to his beleaguered machine gun section, and Chesty Puller, who aside from being a cultural icon of modern-day Marines, is also the only one to have been awarded five Navy Crosses.