"I didn't have a chance to get my weapon ready and I knew he was gonna shoot me, so I dived on him" 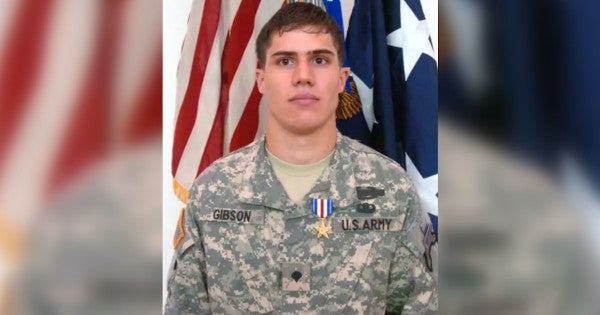 As he moved through the chest-high grass, Gibson stepped on something that he thought was garbage. After taking a few more steps, he turned to make sure. It wasn’t garbage — at least not in the literal sense. It was an al Qaeda fighter armed with an AK-47.

“He didn’t say anything other than giving his war cry,” Gibson recalled. “He had an advantage on me. I didn’t have a chance to get my weapon ready and I knew he was gonna shoot me, so I dived on him.”

The insurgent’s rifle was raised, but Gibson managed to knock the muzzle to the side just as it went off. Unable to raise his own weapon, Gibson tackled the man to the ground and began pounding him with his fists. “[He] ripped off my helmet and all my optics, so I couldn’t see all that well,” Gibson said.

There’s no telling how many Rangers would have lost their lives had he not neutralized the insurgent.

Gibson was awarded the Silver Star for his actions that night. “Rangers are proven over and over again in battle,” said Adm. Eric Olson, then-commander of the U.S. Special Operations Command, during the award ceremony. “Rangers are glorified in Hollywood movies, but you aren’t actors. You are real men who make real sacrifices.”