The Army can’t officially say who is an ‘Army Ranger’

It took the U.S. Army more than two days to answer the question: When are you officially a Ranger? 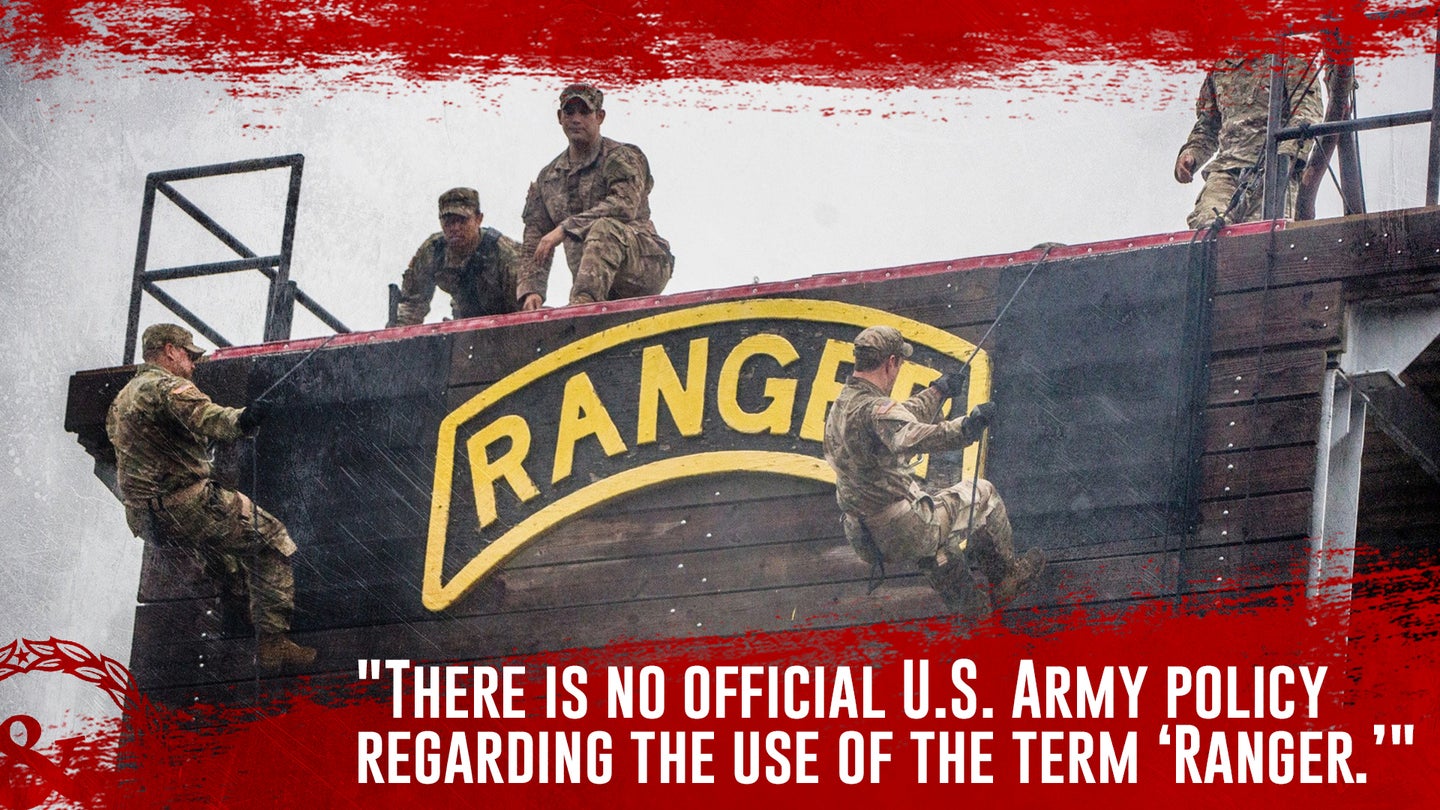 Ah, the U.S. Army Rangers: The stewards of a distinguished martial tradition that spans generations and various conflicts, from the craggy cliffs of Pointe Du Hoc during World War II to the mountains of Afghanistan after 9/11. Their accolades are beyond count, and the battlefield heroism of those who hold the title of “Ranger” is without question.

But there is one critical part of the Ranger story that remains unresolved, and it has to do with the title itself. As it turns out, the Army can’t actually decide who is, or is not, an Army Ranger.

“There is no official U.S. Army policy regarding the use of the term ‘Ranger,’” said Lt. Col. Gabriel J. Ramirez, a spokesman with the Army’s Office of the Chief of Public Affairs.

In military circles, particularly among Army veterans, there is an ongoing and often contentious debate over who can officially call themselves a Ranger: Does the title belong solely to those who served in the 75th Ranger Regiment, a special operations unit that falls under the purview of U.S. Army Special Operations Command; or is it shared by graduates of U.S. Army Ranger School at Fort Benning, Georgia, the service’s premier leadership course? And what about the generations of other soldiers who served during eras and wars when there were no long-standing Ranger units, or when the service’s benchmark for “Ranger” status appeared to be tied to graduating Ranger School?

This is hardly the first time this debate has come up. It seems to grab headlines, or at the very least derail comment threads or online discussions, at least once every few months. And it made its way back into the spotlight on Jan. 22, 2021, after the progressive website Salon raised questions over Arkansas Republican Sen. Tom Cotton’s claims on the campaign trail of having served as a Ranger in Iraq and Afghanistan. The debate around Cotton’s “Ranger” status centers on the fact that while he graduated Ranger School, often called being “Ranger tabbed” or “Ranger qualified,” he did not serve in the Army’s 75th Ranger Regiment.

There’s no shortage of unanswered questions when it comes to the title of “U.S. Army Ranger,” many of which are complicated further by mixed messages, whether it’s in the form of Congressional resolutions, full-throated endorsements one way or the other by prominent military or political figures, or in official statements by U.S. Army commands. For example, buried on Fort Benning’s official website, at the bottom of the 5th Ranger Training Battalion’s landing page is a Mission Statement that reads: “5th Ranger Training Battalion conducts the Mountain Phase of Ranger School in [the] vicinity of Camp Frank D. Merrill [in order to] produce Rangers whose primary mission is to close with and destroy the enemy in direct fire battle.” (Emphasis added.)

In an attempt to put this debate to rest once and for all, we published a story on Monday, Jan. 25, 2021, in which we interviewed Army officials, including those with the 75th Ranger Regiment, who emphatically laid out the Regiment’s stance on who gets to bear the title “Ranger.”

In response to the story, we received feedback from some readers voicing their agreement with the 75th Ranger Regiment’s assessment of who gets to claim the “Ranger” title, with one person writing: “I graduated from Ranger School in November 1969, and proudly wore the tab for 20 years. I would NEVER refer to myself as an ‘Army Ranger.’ That would be a total insult, by me, to all who have ever served in a Ranger unit.”

Related: Tab or Scroll: Inside the contentious debate over who’s an Army Ranger

But other readers suggested we reach out to Airborne and Ranger Training Brigade, which oversees Ranger School at Fort Benning and ask them to weigh in.

And that’s a fair point. It makes sense that the folks who run Ranger School may have an opinion on this: The training course literally has “Ranger” in the name; attending and passing the course is also a requirement for senior enlisted leaders and officers with the 75th Ranger Regiment, and let’s not forget that graduates of Ranger School leave with a tab that reads “Ranger,” all of which seem to feed the confusion that has led to this current debate.

So on Tuesday, Jan. 26, at 12:40 p.m. EST, we reached out to the public affairs office for Airborne and Ranger Training Brigade by phone, followed shortly by an email asking “What is Ranger School’s official stance on this? When are you considered a Ranger?”

Then we waited — occasionally making quick check-in calls as officials worked on a statement, in all likelihood going over the same document several times, adding a word, hurriedly removing it, getting stumped, then adding it back in, before someone decided that it needed to be passed to the next echelon in the public affairs chain.

On Wednesday morning, nearly 24 hours after the initial query, we were informed that the request had been routed to the next highest command, from Airborne and Ranger Training Brigade to the Maneuver Centre of Excellence, also at Fort Benning.

And then we waited some more and made a few more calls, at which point we came to the conclusion that we probably needed to bring this question to an even higher authority within the Army, so we fired off another query, this time to the Army Office of the Chief of Public Affairs. In our email, we asked “When are you officially considered a U.S. Army Ranger?” and requested that any related orders or policies be provided with their response. We also made it clear that we’d likely publish a follow-up story on the widespread confusion over the term.

The following day, Thursday, Jan. 28, more than 48 hours after Task & Purpose reached out to Army officials to once again ask who is, and who is not, officially a Ranger for a follow-up story — don’t forget, we were already given an official answer on this once before — we finally heard back.

“There is no official U.S. Army policy regarding the use of the term ‘Ranger,’” said Lt. Col. Ramirez, the spokesman with the Army’s Office of the Chief of Public Affairs, adding that “The designation ‘Ranger’ has been associated with Soldiers who either graduated from Ranger School or are assigned to the 75th Ranger Regiment.”

(Officials with the 75th Ranger Regiment declined to provide further comment on the matter after the Office of the Chief of Public Affairs issued a contradictory statement.)

While this may be the end of the line on our very strange and bewildering odyssey to get an answer to the question: who is a Ranger and who is not? It certainly is not the final word on the matter considering that the Army never actually answered the question. In fact, the Army’s official stance on the title of “Ranger,” is that it has no official stance.