75 Years After The Battle Of Guadalcanal, The 1st Marine Raiders’ Legacy Endures

Seventy-five years ago, on Aug. 7, 1942, the Allied offensive against Japan began with the invasion of Guadalcanal in the... 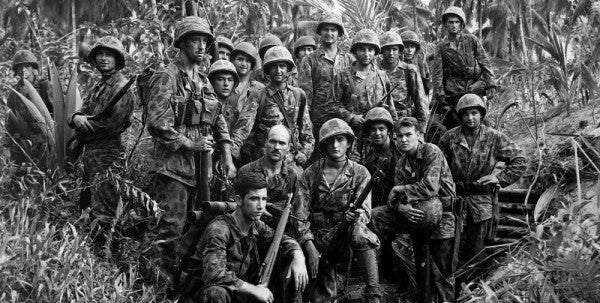 Seventy-five years ago, on Aug. 7, 1942, the Allied offensive against Japan began with the invasion of Guadalcanal in the Solomon Islands. The fight for the small tropical isle became a grueling half-year campaign, with the U.S. Marines locked in an unforgiving struggle against the Japanese troops. But a newly formed American unit was there to meet them: the Marine Raiders. Here’s how the elite force persevered, as told by one of its last surviving members.

Marine Raiders were a particular breed, able to operate far from friendlies, slipping behind enemy lines, launching raids and conducting reconnaissance. The 1st and 2nd Marine Raider Battalions, commanded by the colorful Col. Merritt A. Edson and Lt. Colonel Evans Carlson, were established in February 1942, and their legacy endures today, with the recently rebranded Marine Special Operations Command reclaiming its forbears’ distinctive title.

Among the Raiders at Guadalcanal was Sgt. James “Horse Collar” Smith, a radio operator who earned his nickname when he got stuck hauling carts full of equipment — a consequence of a less-than-amicable relationship with a superior at the time, Smith said in a 2013 interview for the National World War II Museum.

Smith first saw combat with the Raiders during the Aug. 7 assault on Tulagi, a small island to the North of Guadalcanal, when Smith and a small group of Marines were ambushed and became pinned in a drainage ditch.

“I looked around and I didn’t think the lieutenant was going to get us out of this mess,” Smith recounted.

Racing upward, he laid down suppressing fire, forcing the Japanese to break contact and allowing the other Marines to clear the ditch and make their way back to friendly lines — a feat for which he would later receive the Silver Star.

But for all the fighting on Tulagi, it was at Guadalcanal where Smith — now 97, one of the oldest living Marines — and his fellow Raiders would be truly tested.

Following the successful seizure of Tulagi, the 1st Marine Raider Battalion moved on to support the Marine and Army line infantry on Guadalcanal. The Corps had wrested the airstrip at Henderson Field from Japan early on in the fighting, and Japan wanted it back. The expected siege came a month later, on Sept. 12.

The skirmish was dubbed the Battle of Edson’s Ridge for the Raiders’ commander, Merritt Edson, who was awarded the Medal of Honor for his incredible leadership under fire. The Japanese troops launched a night assault, which Smith described as a two-day firefight when he spoke to Marines at Quantico, Virginia in March. As darkness fell on the first night, the enemy attacked across the line, softening the Marines with artillery, looking for an opening to exploit, and then “pounding it repeatedly,” Smith said.

The raging battle of Edson's Ridge is depicted in all its fury in this oil painting by the late Col Donald L. Dickson, who, as a captain, was adjutant of the 5th Marines on Guadalcanal.Image via Wikimedia Commons

At one point in the battle, Smith was ordered to take his “company” — which amounted to roughly seven headquarters Marines — and reinforce a company of Raiders and an attachment of Marine paratroopers.

“It was a hell of a battle,” Smith said. “That’s where the Japanese hit, right at that juncture between the companies.” Marine artillery created a protective buffer around the beleaguered grunts, but once the Japanese made it to the Allied line, “it was like a huge brawl, with mixed in with us,” recalled Smith, who at one point in the melee used the body of a dead Japanese soldier as cover, resting his rifle on the corpse to steady his aim as he fired. As gunfire raked the line, Smith was was hit by a grenade, which ripped “chunks” from his shoulder down to his ankle, and he was moved to the aid station for treatment he said. The fighting continued that way the next day, with the Japanese assaulting the Raiders, as the Marines struggled to hang on.

“Some of the toughest men I knew had experienced the pressures of war, but we could not fall apart — we couldn’t afford it,” Smith said. “We bit our tongues, kept our heads down low and kept pushing forward.”

And they did, at great cost. The Raiders lost 135 men, the attached paratroopers suffered 128 dead, but the blow to the Japanese was immense: more than 500 killed. Though injured, Smith preferred to be back among the Raiders than at the aid station, and so he returned to the battalion and went on to fight again on Guadalcanal during the first and second battles of Matanikau and on the Matanikau river. By the time the fighting ended on Guadalcanal and the Japanese forces withdrew, the Allies had lost 1,600 troops and suffered 4,200 wounded. The blow to the Japanese forces was devastating — 24,000 dead.

“They never gave up,” Smith said of the Japanese soldiers he and his fellow Raiders fought on island. “For them, there was no losing that war.”