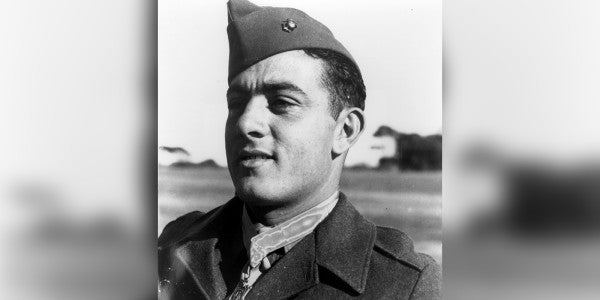 Editor's note: A previous version of this article was published on Feb. 19, 2015.

Every Marine who came after Basilone knows his name and his story: A former soldier who joined the Corps because the Army “wasn't tough enough” and rose to fame during the Battle of Guadalcanal, when he ran ammunition along the lines to beleaguered and cut off Marines. At points in the battle, Basilone hefted a Browning machine gun and fired from the hip — sustaining third-degree burns on both hands from using the weapon without protective gloves.

He was awarded the Medal of Honor for his extraordinary heroism on Oct. 24, 1942, while serving with the 1st Battalion, 7th Marines.

“While the enemy was hammering at the Marines' defensive positions, Sgt. Basilone, in charge of 2 sections of heavy machineguns, fought valiantly to check the savage and determined assault,” reads his citation. “In a fierce frontal attack with the Japanese blasting his guns with grenades and mortar fire, one of Sgt. Basilone's sections, with its guncrews, was put out of action, leaving only 2 men able to carry on.”

“Moving an extra gun into position, he placed it in action, then, under continual fire, repaired another and personally manned it, gallantly holding his line until replacements arrived. A little later, with ammunition critically low and the supply lines cut off, Sgt. Basilone, at great risk of his life and in the face of continued enemy attack, battled his way through hostile lines with urgently needed shells for his gunners, thereby contributing in large measure to the virtual annihilation of a Japanese regiment. His great personal valor and courageous initiative were in keeping with the highest traditions of the U.S. Naval Service.”

Three quarters of a century later, John Basilone's example continues to inspire the Marines who follow after him.