A routine traffic stop and speeding ticket in June became the catalyst for a patriotic display on Aug. 6, when... 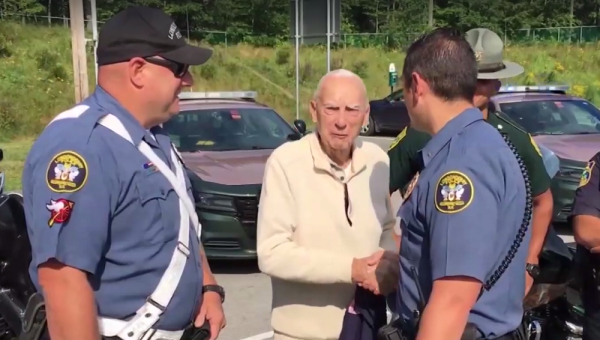 A routine traffic stop and speeding ticket in June became the catalyst for a patriotic display on Aug. 6, when police officers escorted 96-year-old Marine Corps vet Harold Sheffield from Bristol, New Hampshire, to the state line in a “rolling salute.”

It all started when Tim Stevens, the local police chief in Hill, New Hampshire, noticed an all-too-familiar Marine Corps bumper sticker (more or less standard issue for all jarhead-owned vehicles) when he pulled Sheffield over for speeding in June.

Stevens, a 20-year Marine veteran, brought the bumper sticker up in conversation, along with the customary “Semper Fi,” and mentioned that he retired in 2002.

Turns out, Sheffield served with Carlson’s Raiders on Guadalcanal during World War II’s Pacific campaign. If Marines are expeditionary warfare pros, then the Marine Raiders are the Corps’ experts, and then some: The raiders of World War II, and their successors today, are an elite unit designed to operate far from friendly lines, conduct guerrilla operations, and are widely regarded as one of the earliest U.S. military special operations units.

After the traffic stop, Stevens planned a surprise for the old war horse. On Aug. 6, as Sheffield prepared to head to Massachusetts to visit family, before flying to San Diego, California, for a Marine Raider reunion, local law enforcement officers assembled a dozen cars for a motorcade to escort Sheffield out of state — and probably to make sure he didn’t get another speeding ticket.

“Well I was wondering what was happening,” Sheffield told WMUR. “I couldn't believe it, I really didn't. And there's so many of them.

“No one's going to believe it,” Sheffield continued. “I got the pictures. I”ll show 'em!”