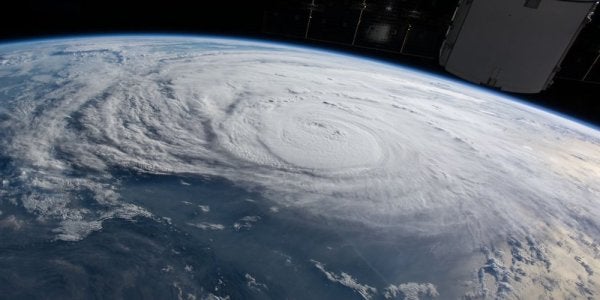 On Sept. 11, 1954, a specially modified Air Force B-29 Superfortress with the 53d Weather Reconnaissance Squadron, 2nd Weather Wing of the Air Weather Service took off from Kindley Air Force Base in Bermuda with some unusual cargo on board: A 46-year-old radio and broadcast journalist Edward R. Murrow, the host of CBS News’ See It Now and one of the most revered media figures of the 20th century known for his candor, virtue, and trustworthiness. And aircraft wasn’t giving Murrow a lift back to New York — the “Hurricane Hunters” of the 53rd were flying him directly into the heart of a hurricane.

For an episode of See It Now, Murrow and his producers hitched a ride on the B-29 to get an up-close-and-personal view of Hurricane Edna, the Category 3 Atlantic hurricane that would wreak havoc across New England, leaving 20 dead. Though Murrow’s last-minute addition ended up bumping Bob Simpson, the famed American meteorologist and future inaugural director of the National Hurricane Research Project eventually established in response to the 1954 hurricane season, it was totally worth it: The next day, Murrow described the inner workings of Edna in exquisite detail.

While Murrow’s flight is public knowledge, few had experienced the full glory of his account until 2015, when The Atlantic’s Adrienne LaFrance managed to get CBS to pony up the tape of the eight-minute journey through Edna’s chaotic wind fields to the strangely peaceful eye at her heart. You can read the whole transcript over at The Atlantic, but here are a few of our favorite snippets:

On the Air Force’s new mission:

We took off from Bermuda at 11:30 a.m. in the specially equipped B-29. The Air Force boys were working for the taxpayers; going out to chart, measure, map, and study the hurricane. We climbed to 10,000—blue sky overhead, blue water without a single whitecap below—and headed west. For about an hour and a half, there was nothing to do except remember that flying is made up of many hours of boredom, interspersed with a few minutes of stark terror.

Into another cloud, out on the other side, and the ocean had changed its face. Long irregular furls like a drunken plowman had been plowing a field of blue velvet and turning up snow. We went down to 7,500. Surface winds now estimated at about 60 miles per hour. Flew right along the top of a flat cloud with the feeling that if the pilot let his wheels down, he'd leave a track in it. The next time we saw water, the wind was cutting the tops off the whitecaps and there was a thin gauze of spray as far as we could see. Then, into the cloud again, and that ghostly gray light that seemed to rub off on the faces of the crew members and caused them all to look as though they were ill and hadn't slept for a long time.

Edward R. Murrow in his office, 1957.Photo via Broadcasting Archives at the University of Maryland/Wikimedia Commons

On hunting for Edna’s eye — and losing control

There were sudden changes in temperature. More rain. Radar reported, the engineer reported. The navigator wanted to know if anybody could see surface wind. The radar scope didn't show anything. We were bounced around a little. The skipper said, “There's a storm around here somewhere, let's go find it.”

The navigator asked for a turn to the left. And in a couple of minutes, the B-29 began to shudder. It was a twisting, tortured, wringing sort of motion. The co-pilot said, “I think we're in it.” The pilot said, “We're going up,” although every control was set to take us down. Something lifted us about 300 feet and then the pilot said, “We're going down,” although he was doing everything humanly possible to take her up. Edna was in control of the aircraft.

On the confusion of Edna’s eye:

The eye was 20 miles in diameter. We went down to 1,500 feet and flew back and forth across it, making shallow penetrations of the storm area. The temperature went up 14 degrees. The altimeter said 4,000 feet but we were actually at 1,500. The civilian weather officer aboard looked at Edna with a clinical eye, and said, “She’s a copybook hurricane. Beautifully formed.”

The best line of Murrow’s report comes by the end. Blow away by his experience, the journalist paid tribute to the young aviators who had shepherded him into Edna’s heart and back without so much as a scratch.

“These young men who fly the Air Weather Service are doing all that can be humanly done to provide information upon which adequate warning can be based,” Murrow wrote. “And to this reporter, after flying only nine hours with those young men of the Air Force yesterday, on a routine mission, I think they deserve combat pay.”