When most people find out you’re a Black Hawk pilot, the first question you can anticipate is, “Have you seen... 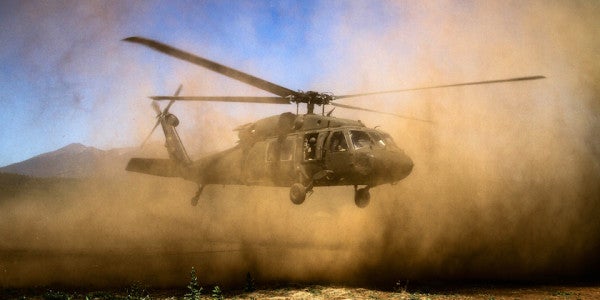 When most people find out you’re a Black Hawk pilot, the first question you can anticipate is, “Have you seen Black Hawk Down?” Yep, read the books, too. I crack up when I see Jeremy Piven slamming levers around like he’s closing a truck trailer. It’s telling that the thing most people relate to this helicopter dates from the first half of the 90’s.

The Black Hawk was engineered and introduced into the force in the late 1970’s as a replacement for the UH-1 Huey fleet. It’s the aviation workhorse of the modern Army. There have been a host of upgrades since the early days, but the average Black Hawk on the line uses steam gauges and 20th century navigational equipment. There are exceptions, like the UH-60M model and the coming UH-60V upgrade but for the most part the majority of the fleet is the UH-60L or UH-60A+ variant, state of the art about 20+ years ago.

Related: 6 Things You Probably Never Knew About Black Hawk Down »

Even though we don’t have all-glass cockpits or other advanced avionics in most airframes, we still get the job done. The Army possesses a large fleet of rotary wing aircraft to serve and better enable the ground commander. It’s not about us, and that’s the way it should be in the Army.

Still, we do get a kick out of doing a lot of what every other branch does, only with less equipment and less assistance from automation. We land on ships at sea and fly over water at night without altitude hold like the Navy and Coast Guard have. (It’s like being in a black trash bag without outside references.)

We perform hoist missions in the mountains maintaining 100 feet above the surface and plus-or-minus-five-foot drift with a human dangling below, without a computer doing it for us (unlike many modern helicopters). And sometimes we get to switch from being a flying machine gun platform for gunnery practice to picking up a water bucket and putting out the fires our tracers started on the range with a 6000-pound load of water slung underneath.

Army aviation culture is oriented to the ground commander, and Army senior leadership typically doesn’t come from the aviation ranks. This has some consequences for our lifestyle compared to the other branches.

You won’t find us wearing flight suits like Tom Cruise. (Our uniform is tailored to resemble the standard soldier’s.) We don’t wear scarves like the Air Force. We don’t get different colored shoes like the Navy. We don’t have people to carry our stuff to the aircraft. We wipe our own windows and sometimes we’re lucky enough to be allowed to pitch in and help with some of the labor involved in maintaining these aircraft.

Still, some of the perks we have compared to others in the Army are nice. The worst you’ll usually encounter for sleeping conditions is a cot instead of a hole in the ground and we don’t get stuck on the FOB for months on end. We get to meet some really interesting people.

One of the missions you encounter in the Black Hawk world is VIP transport, which yours truly is currently performing. VIP sounds important, and it is. Your important passenger could be a general and their staff, a political leader, a foreign leader, etc. but it’s not fun or glamorous. Especially when cleaning up after cranky senior officers, or the staff members who tend to treat the helicopter like a prom night rented limo.

Our aircraft are meant for tactical transport, so we don’t have leather seats, air conditioning or carpet. We do our best to keep them clean but nature has other designs most of the time. Other services give their aircraft at least some shelter, but the Army often has to let ours bake in the sun and collect moon dust in the desert.

Senior military passengers fall into two categories: low maintenance and high maintenance. Some will stay quiet and enjoy the ride, others want to pump you for information to make sure they are getting as many perks and special considerations as their peers. It’s really hysterical to witness a general getting jealous of another general because they were dropped off or picked up in a certain way.

VIP transport can make you neurotic if you’re not careful. The passengers (PAX) are seldom on time and you’re frequently held accountable for factors way outside of your control. The best advice is to smile, not take it personally and remember that the best indicator that you’re doing your job well is not hearing complaints. Little do your passengers know how many hours went into prepping the aircraft, overcoming the myriad little technical issues and navigating the minefield of misinformation spread through multiple echelons of staff to show up early and deliver them safely.

There’s no glory, but at least there’s flight time.

Most people don’t grow up around helicopters. They learn whatever they know from TV shows or movies. For some reason, most cinematic depictions of helicopters feature the “wopwopwopwop” sound of a 2-bladed Huey. We don’t sound like that. Our engines don’t scream louder and louder when we pick up from the ground. We think it’s hysterical when people bend all the way over at the waist and run under the rotor system to get into the helicopter – for a UH-60 anyway, this is totally unnecessary.

It’s normal to see hydraulic fluid dripping. We sweat. We smell. We don’t enter the destination into a computer and sit back for hours on end listening to music. We control the bird with both hands and feet at all times, while talking on and listening to four different radios plus the crew plus the PAX. It’s a hell of a lot of fun, but it takes a lot more work than some would suspect.

Still, we know we have a more comfortable existence than the ground pounders and the most satisfying thing you can do is to give them a lift, or carry our MEDEVAC brethren, speeding them to recovery.