Part of being a great commander-in-chief is having a deep respect for the nation’s military and its personnel. For President... 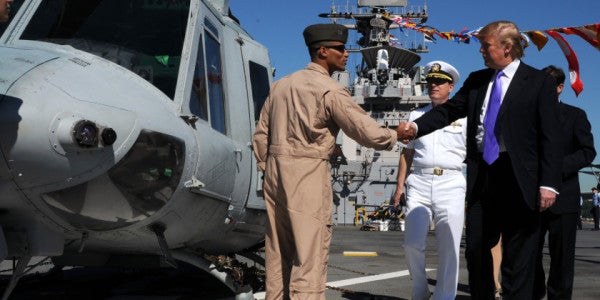 Part of being a great commander-in-chief is having a deep respect for the nation’s military and its personnel. For President Donald J. Trump, that means celebrating your inauguration by showing off America’s military muscle.

During President Donald J. Trump's inauguration on Jan. 20, the 45th president will have a flyover of as many as 20 aircraft drawn from each branch, reports the The Huffington Post. The Air Force will fly the F-35, F-16, F-22, and F15-E. The Navy will fly F/A-18s. The Army will fly UH-60 Black Hawk helicopters. The Marines will fly V-22 Ospreys and the Coast Guard is aiming to fly MH-65 rescue helicopters.

However, this is actually a toned down version of the military presence Trump’s team initially asked for. They didn’t want planes or helicopters; oh no, they wanted tanks and missiles. Talk about making a statement as commander-in-chief.

In preparation for the Jan. 20 transfer-of-power, a member of Trump’s transition team floated the idea of including tanks and missile launchers in the inaugural parade, a source involved in the planning told Huffington Post.

“They were legit thinking Red Square/North Korea-style parade,” the source said, in reference to the large-scale military parades in Moscow and Pyongyang, which are often seen as an aggressive display of muscle flexing.

Unfortunately for those who want to see a bunch of tanks come rumbling down Pennsylvania Avenue, the request was shot down by the military, which works closely with the presidential inaugural committee. The reasons? First some were concerned about what kind of image having tanks and missile launchers steamrolling through the capitol would send. And secondly, the roads simple couldn’t handle that much weight. After all, Washington D.C. is built on a swamp.

Though he may not be getting the big guns for his inauguration, the newly elected president has alluded to his desire to hold more military parades during his term in office.