Esteban Santiago, the 26-year-old suspect in the shooting at the Fort Lauderdale-Hollywood International Airport that claimed the lives of five... 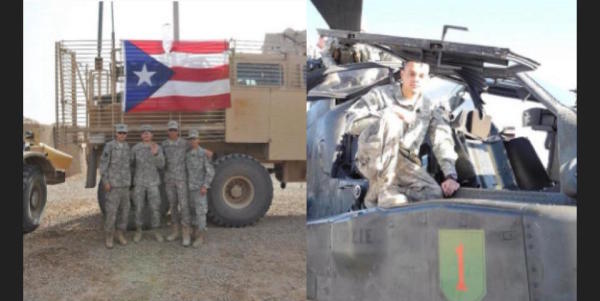 Esteban Santiago, the 26-year-old suspect in the shooting at the Fort Lauderdale-Hollywood International Airport that claimed the lives of five people and wounded at least eight others, served as a combat engineer in the Army National Guard, according to an Alaska National Guard spokesman.

An Instagram account that seems to have belonged to Santiago offers a small snapshot into the suspect’s life in the military. The account, which was originally posted on Twitter by the well-known hacker, who goes by the name Jester, at 6:42 p.m., was deactivated soon after the shooting. It included three photos — all posted to Instagram roughly 4.5 years ago — of Santiago in uniform. All appear to have been taken on a forward operating base and none were accompanied with any text aside from a few simple hashtags, like #army and #helicopter.

In one photo, Santiago appears in body armor and a helmet, surrounded by several people in Halloween costumes. The infrared American flag on Santiago’s right shoulder suggests that the photo was taken either in a war zone (presumably Iraq), or immediately before or after the deployment.

In another photo, Santiago, again wearing the infrared flag that soldiers wear while deployed, stands atop an Apache helicopter emblazoned with the emblem of the Army’s 1st Infantry Division. The third photo shows four soldiers standing in front of an MRAP that has been draped with the Puerto Rican flag.

Santiago’s profile bio reads, “Here’s to finding whether or not your mission on earth is finish ; if your still alive … It isn’t.” It is nearly identical to a quote from American author Richard Bach’s 1977 novel “Illusions: The Adventures of a Reluctant Messiah,” which he wrote as a follow-up to “Jonathan Livingston Seagull,” published in 1970. The story poses the idea that reality is merely an illusion.

According to CNN, Santiago showed up at an FBI office in Anchorage a few months ago where he was interviewed and admitted he was hearing voices, including some telling him to join ISIS. He then checked himself into a hospital for a mental health evaluation.

The shooting started on Jan. 6, around 1 p.m., Santiago open fired on a crowd of people inside Terminal 2 of the Fort Lauderdale-Hollywood International Airport. According to multiple reports, law enforcement officials believe Santiago flew Delta from Anchorage, Alaska and then took a connecting Delta flight from Minneapolis-St. Paul to Fort Lauderdale. There, he collected his checked bag, entered the men’s room, and loaded the weapon. He then returned to the baggage claim in Terminal 2 and started shooting.

Federal guidelines permit passengers to check unloaded guns in a locked case, and also or ammunition to be placed in checked baggage.

Airport police officers chased Santiago through the terminal while he was firing before shooting him near a departure gate and arresting him.