Meet The 24-Year-Old Who Made This Beautiful .50 Cal Rifle

Everybody loves a .50 caliber rifle, at least that was Justin Kamal’s thought when he set about making this beast.... 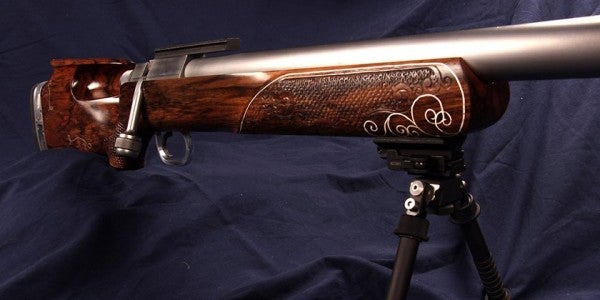 Everybody loves a .50 caliber rifle, at least that was Justin Kamal’s thought when he set about making this beast. It turns out he was right. It also helps that he made more than just a rifle.

This thing is a work of art.

A recent graduate of Trinidad State Junior College gunsmithing program in Colorado, the 24-year-old gunmaker decided to make the nearly 50-pound rifle for his final project because he wanted to make a statement, he said.

“I wanted to really put myself out there and just make something ridiculous and over the top that would grab attention,” Kamal told Task & Purpose. “I wanted to show off a bunch of different techniques that I learned and I thought that would be a good way. Who doesn’t want to see a .50 cal?”

With ridiculous and over the top as the goal, he clearly nailed it and though the massive muzzle break is a standout feature, what really draws your eye is the wood stock, which posed a bit of a problem for Kamal, who was concerned that the gun’s power would break it.

“Since I was putting it in a wood stock there was a concern of destroying it, when I fired it, because I wasn’t too familiar with how it would work being in a wood stock as opposed to on like a sledder or a chassis system,” Kamal explained. “So I went probably a little unnecessarily far in the recoil reduction I added to it.”

Kamal put 2 1/2 pounds of mercury tubes inside the rifle and added a recoil reduction pad to the stock to help with its immense kick.

For Kamal, the draw to the project was less about the rifle’s power and more about the artistic side of gunsmithing. For him, it’s all about the craft and the design he says.

“I really tend to gravitate toward the artistic side of gunsmithing.” said Kamal, who added that he hopes to focus on carving and inlaying in future gunsmithing projects.

Who knows, maybe down the road he’ll try his hand at another “ridiculous and over the top” weapon system. Personally I’d like to see his take on a light machine gun, like a wood-paneled M249 SAW.