When the Segway first appeared more than 15 years ago, it seemed like a simple, elegant solution to an age-old... 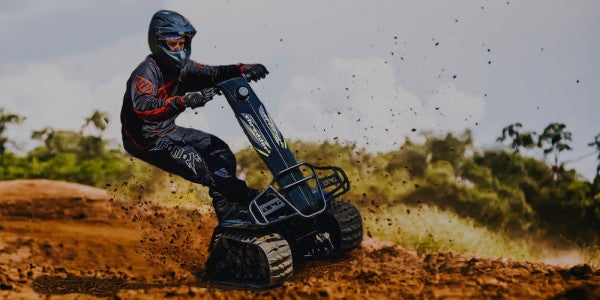 When the Segway first appeared more than 15 years ago, it seemed like a simple, elegant solution to an age-old problem: How to get a single person from point A to point B while exerting the least amount of effort. But there’s a clear problem with these two-wheeled people-movers: No matter how efficient or safe they may be, they’re just too damn ugly. Riding one around anywhere is an invitation to get your lunch money stolen.

Not so with BPGWerks’s DTV Shredder, which looks like something out of Starship Troopers:

The Canadian adventure company’s muscular dual-track beast first appeared at the 2010 Military Vehicles conference in Detroit, billed as a “first response modular platform for soldiers” — the world’s deadliest skateboard, if you will. But after years of development, the company’s taken more of a recreational path, marketing this one-man tank platform as “the first true crossover vehicle for action and power sports.”

They’re not wrong. Powered by a 196cc 4-stroke gasoline engine and padded with reinforced molded rubber tracks, the 280-pound beast has a top speed of 25 mph, fast enough to whisk an infantryman in and out of a tight situation. Recent test footage shows the Shredder, well, shredding the bejesus out of terrain, from forests …

This thing looks like a skateboard and a snowmobile had a baby, and that baby loves to tear off around the surrounding countryside like an adrenaline junky in search of a fix. It’ll cost you $4,950 to get your hands on one of these bad boys, but admit it: You’ve always wanted to do backflips through your local forest, haven’t you?