Meet ‘The Most Armed Man In America’ And His Insane Arsenal

The video starts innocuously enough. A bearded gentleman waddles into a room covered floor-to-ceiling with guns and ammo belts and... 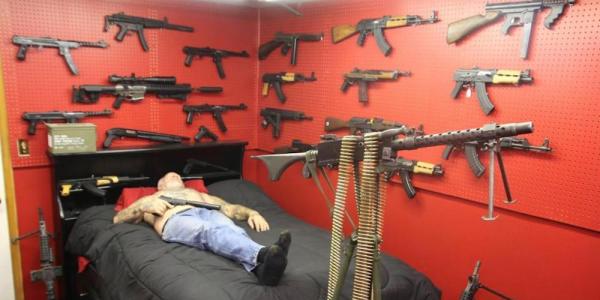 The video starts innocuously enough. A bearded gentleman waddles into a room covered floor-to-ceiling with guns and ammo belts and introduces himself. “I’m the Dragon Man, from Dragon Land,” he says, with a slight New York accent, his arms sleeved in tattoos, “and today we’re going to explain why they call me The Most Armed Man In America.”

What follows is a tour through an arsenal that’ll make your jaw drop: 3,000 working firearms, 88 military-grade vehicles, and hundreds upon hundreds of mannequins festooned in military uniforms.

“Everything works. Nothing’s fake,” the Dragon Man says. “Because this is a private collection, not a government museum, everything can work.”

The Dragon Man was once Mel Bernstein, a wimpy Jewish boy who used to get his ass beat on the streets of Brooklyn. But after a brief stint working on weaponry for the Army at Fort Bliss during the Vietnam War, Bernstein opened a motorcycle repair shop in Long Island, where he earned the name “Dragon Man” for “pop wheelies on the Harley that he fashioned with a fire-breathing dragon head,” as the Colorado Springs Gazette reported in a lengthy 2017 profile.

In 1982, Bernstein and his wife Terry Flanell moved to El Paso County, Colorado, where Bernstein set to work on his massive collection of firearms and military vehicles. For the last 30 years, he’s owned and operated “Dragon Land,” the sprawling 260-acre shooting range and military gallery, overflowing with high-powered weaponry (he has a Class III federal firearms license) and military memorabilia from World War I through Vietnam.

Among the most impressive items in his collection: a 65,000-square-foot military museum with rooms for every country that’s gone to war with the U.S. between World War I and Afghanistan; more than 150 M-1 Garands’ six “brand new” 1000-pound bombs; a baker’s dozen of .50-caliber machine guns; 48 swords (including a Japanese “suicide sword”); and his infamous motorcycle, now equipped with two Colt 9mm submachine guns. Oh, and a 40-ton Russian tank:

Now 71, Bernstein now operates Dragon Land alone: In 2012, Flanell was killed in a freak accident after being struck by two smoke bombs, moving at 150 mph, that were part of the special effects for a reality TV show on the Discovery Channel. “I've been running this rifle range for 30 years and no one's got hurt, because it is very safe here,” Bernstein told ABC News at the time. “Out of eight days of filming, it happened in the last 30 seconds, the last frame. And it happened to my wife.”

So what does the Dragon Man do during the day? “I have weapons so big I can’t even shoot them here,” he jokes in the video. “I’m going to have to wait until something big happens in town.”