Do you have an outdoor grill? Is it American? Is it… badass? If not, I must implore you to ditch... 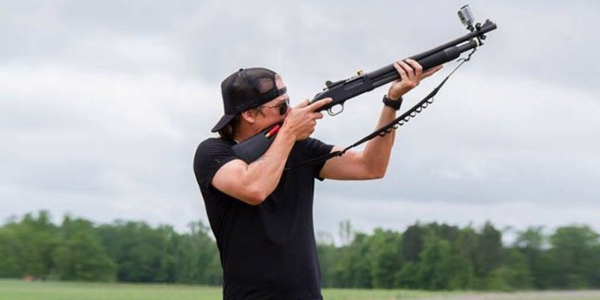 Do you have an outdoor grill? Is it American? Is it… badass? If not, I must implore you to ditch it, no matter how well its years of built-up porterhouse patina have served you. You must buy one of these bawitdabarbecue Kid Rock grills. If you don’t, there’s a very good chance that Kid will make more Instagram videos like last week’s, and we can’t have that.

Mr. Rock, you see, has a certain genius for all things America: rocking out to cheap beer, supporting the troops, walking the country shirtless, and also making bucks selling some real Americana to real Americans. In this case, selling good ol’ U.S.-made charcoal grills with a finish that best resembles your favorite “Sons of Anarchy” character: flat and dark.

In order to convince you to drop $100 on this tank o’patriotism — $150, if you prefer gas — the prodigious author of such seminal American works as I Am The Bullgod and You Never Met A Motherfucker Quite Like Me has a secret weapon. Two secret weapons, actually.

2. And these all-American dudes with this heartland catapult:

I mean, you get where this is going.

As the presenter on the above IG video says:

You know what’s American? Catapulting foreign-made grills through the sky and shooting them down because they stink. If it’s not made in America like the Kid Rock American Badass grill, you don’t want it!

This is followed by Mr. K. Rock and his scattergun squeezing shots at a sad black grill launched across the sky like so much cheaply imported Walmart shlock. “This is what we think of ‘Made in China!’” Rock yells.

Does his skeet-skill match his sales-pitch enthusiasm? You be the judge:

Looks like CGI to me. But as long as the illusion’s made in America by Americans, it’s a good damn illusion.