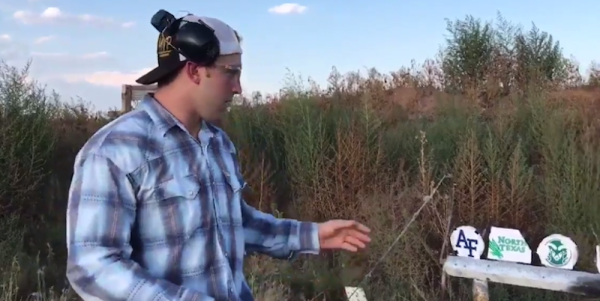 Linebacker Cade Barnard, who recently entered his senior year at Seminole High School, selected the Army’s academy by heading down to the gun range, setting up a row of school logos and coolly picking off one after another with a Sig Sauer TTT until he was left with just two choices: Colorado State and West Point.

“Go Army, Beat Navy,” Barnard said, smiling as he removed his flannel shirt to reveal a West Point polo underneath.

Barnard had his pick with 15 offers from around the country — including Army, Navy, Air Force, Louisiana, Bowling Green, Texas State, and Colorado State, according to ESPN.

“Academically I'm looking for a high level school that will take my career to where it needs to be,” Barnard told UMass 247. “Athletically, I want to compete with and against the best.” It appears he’s found that in West Point.

Still, in an era when colleges are increasingly dealing with violent protests, lockdown drills have become as common as keggers and school shootings are all too common (one occurred just last week in Spokane, Washington, leaving a student dead), Barnard’s viral stunt might not seem as cute to administrators of some of the institutions he turned down.