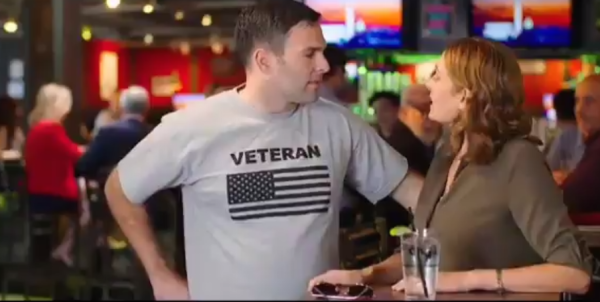 Army veteran Dan Helmer has released a painfully awkward advertisement for his 2018 campaign against Virginia Congresswoman Barbara Comstock, jumping on a media highway to the danger zone, politically speaking.

In the video, Helmer takes us back to the bar scene in the 1986 classic Top Gun, wherein Maverick serenades Charlie to the tune of The Righteous Brothers’ You’ve Lost That Loving Feeling. It was endearing when Maverick did it. But when Helmer — a Democratic hopeful — starts belting out words about defunding Planned Parenthood and ragging on Comstock’s conservative values, let’s just say his ego may be writing checks his campaign can’t cash.

What’s worse than the lyrics though, is the fact that Helmer is wearing an 11-striped flag t-shirt that reads “veteran.”

Talk about a target rich environment.

Helmer, who graduated from West Point and served in Iraq in 2004 and Afghanistan in 2007, is running for the 10th district in Virginia. Comstock, a Republican, won her second term by six points in the 2016 election.

“This election evidences a loss of trust between our people and our government and a desire for new leadership and fresh perspectives,” Helmer told the Washington Post in April. “It’s important for America that we fix this.”

Maybe so, but remember, Dan, no points for second place.