Tom Brady Is No Match For A Military Working Dog

New England Patriots quarterback Tom Brady is a five-time Super Bowl champion and an idol to virtually every God-fearing Pats... 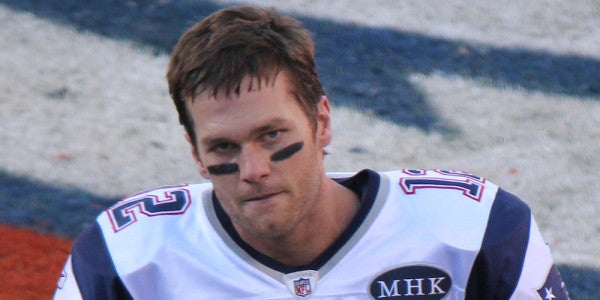 New England Patriots quarterback Tom Brady is a five-time Super Bowl champion and an idol to virtually every God-fearing Pats fan in America. If I were a football fan, I would adore the affable Brady and envy Gisele Bündchen with every atom in my body — but even I have to laugh at the mental image of the star QB getting his leg torn up by a military working dog that clearly got a whiff of something she didn’t like.

Speaking to the press in Minnesota ahead of Super Bowl LII against the Philadelphia Eagles, some schmendrick local CBS News reporter asked Brady if he’d ever been bitten by a dog. Apparently, even God-Emperor Brady had to endure a dog’s fangs twice in his life — and one of those times, the quarterback responded, was during a visit from local service members who owner Robert Kraft had invited to watch a practice at Gillette Stadium. From CBS News:

When the players were done with their day of work, Brady and others went to the middle of the field to greet the vets. Brady didn’t see there were also dogs present, and raised his arms up. That was a big no-no around these trained animals.

Once Brady raised his arms, one of the dogs jumped up and tried to bite at his neck. The animal’s handler was able to pull the dog back, so luckily, it didn’t rip apart Brady’s throat. Instead, it got Brady’s thigh.

I have to call some level of bullshit on the arm-raising bit — how efficient is it to train and operate with working dogs when you have to worry about getting your shit pushed in during a rendition of YMCA? As one Task & Purpose staffer told me, “I was housed next to the working dogs in Djibouti and guarantee I raised my arms on more than one occasion.”

Anyway, Brady apparently tried to play off the whole incident like it was no big deal, even though the Patriots’ trainer had to stitch up the wound to his quad later that evening. “I was standing there with a bunch of tough guys and they all saw it,” Brady said. “They asked if I was okay and I said, ‘of course I’m okay.’ But I could feel the cut. Obviously, I couldn’t say anything because I was with the toughest guys in the world. So I just sucked it up.”

Let this be a lesson to you all. Military dogs don’t give a shit how many Super Bowl rings you have — they’ll take you down any day of the week.

Here’s video of the question and answer, courtesy of the Providence Journal.