Only One Thing Can Stop This No. 1 NHL Team: The US Army

As the Global War on Terror has crawled along, it’s produced a glut of movies, books, and other junk by,... 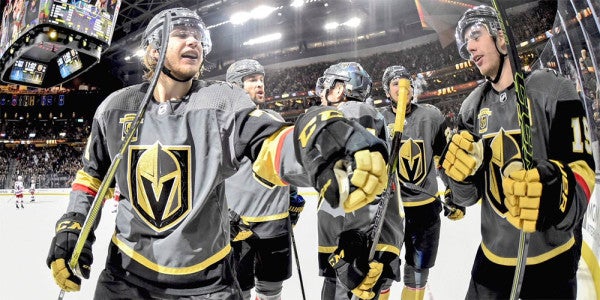 As the Global War on Terror has crawled along, it’s produced a glut of movies, books, and other junk by, for, and about vets. It’s also led the armed services to get very protective of their brand and logos as well-meaning veteran entrepreneurs and shady fly-by-nighters try to turn a buck on America’s near-universal love for all things military.

Just saw a girl with a Bucks Catholic golden knights football sweatshirt. Guess the army better go after this high school too @GoldenKnights

It may sound a little like the scurrying the Navy did last year when it learned that the service’s new recruiting tagline, “Forged by the sea,” was already trademarked by a nice little lady who makes handcrafted jewelry on Cape Cod. The principle is the same: The military services have reputations and cultural associations to defend, and they’re concerned not only about grifters, but the dilution of their brand by whomever else uses it.

But this case is a little different: The Army actually has Golden Knights. That would be the service’s parachute team, a source of pride and airborne game-ball deliveries since 1962. Did Foley know that? Well, yeah, says the Army — pointing to a 2016 Las Vegas newspaper article about the naming controversy, in which Foley said: “I have great respect for the Golden Knights parachute team,” he said. “In fact, I tried to incorporate them into the [NHL team’s opening] ceremony last week, but we couldn’t make it work.”

Ditto with the ice-bound Golden Knights’ black-and-gold color scheme. “Bill Foley is a West Point guy, sort of using those colors,” Golden Knights GM George McPhee told the Washington Post last year, when the team uniforms were unveiled. “You know his history at West Point. You know about the classmates he had that he lost serving this country. So, those colors mean a lot to us, and will mean a lot to our players.”

In fairness to Foley, fans on social media thought the black-and-gold uniforms kind of sucked, so it’s not clear he was looking to cash in on the Army’s mojo with that decision. But the Army is nonetheless unhappy with his glomming onto their brands. The service’s written protest said the Golden Knights name is “symbolic of the extensive good will and public recognition established by the United States Army,” and the Vegas team is “confusingly similar in sound, meaning and appearance” to that storied jump team.

I'm intrigued greatly by @GoldenKnights potentially being forced to change name. After early succes, might be unique opportunity to cash in with name and logo change.

Foley — who also recently renamed his mortgage-processing business Black Knights Financial Services, after USMA’s sports teams, and “even attempted to name the [Vegas] hockey team the ‘Black Knights,’” according to the Army — seems to think that’s all a load of malarkey. On Thursday morning, the Vegas Golden Knights released a statement to “strongly dispute” the Army’s trademark claims:

The @GoldenKnights release statement on Dept. of Army going after them on trademark violation grounds.

"We are not aware of a single complaint from anyone attending our games that they were expecting to see the parachute team and not a professional hockey game" = fine art. pic.twitter.com/981zkOqD9n

Their key argument: This horse is long gone from the barn. We’ve been playing hockey for half a season now, “coexisting” with the Army’s Golden Knights “without any issues for over a year,” the team said.

How the Patent Office will sort this all out remains to be seen, but it’s likely to take a while. In the meantime, the Vegas Golden Knights have become one of the teams to beat in the NHL this year. Maybe the Army should want some more of that winning brand association.