The Army Is Considering A Temporary Upgrade In Rifle Calibers

The Army plans to field a 6.5mm intermediate caliber rifle around 2020 — but in the meantime, some riflemen feel... 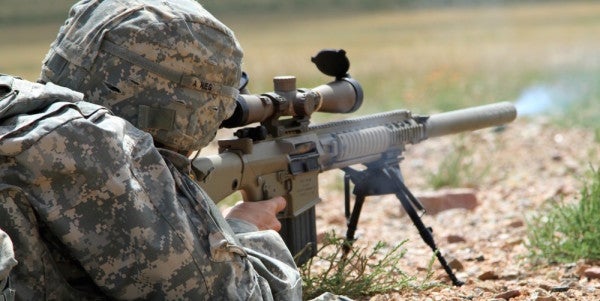 The Army plans to field a 6.5mm intermediate caliber rifle around 2020 — but in the meantime, some riflemen feel the service’s current standard 5.56mm rifle cartridge isn’t giving them enough bang in the field. “The troops feel like they’re in a street fight with a guy with longer arms,” according to Soldier Systems.

One solution the service is reportedly considering is to arm infantry rifle squads and brigade combat teams with the 7.62mm NATO round until Army officials settle on a new 6.5mm rifle. Of course, if you’ve ever played with a Ruger SR-762, you’re probably familiar with 7.62mm NATO — it’s both common and devastating.

Related: Should Soldiers Be Able To Choose Their Barrel Length? »

Adopting the ubiquitous 7.62 ammo means the service could lean on any of several “government off-the-shelf” firearms chambered for the big NATO round. And upgrading to those arms could be a quick process, meaning American troops will enjoy an immediate boost in firepower without waiting for committees to pore over various specs. (They’ll also enjoy an immediate boost in gear weight — that 7.62 sure isn’t light, especially when you’re lugging around 210 rounds of it).

The Army could also decide none of these options meet the soldiers’ needs and solicit bids for new weapons from commercial gunmakers. Of course, Soldier Systems points out, if the service went that route, the resulting 7.62mm weapon could become a soldier favorite once it’s issued, and the planned 6.5mm rifle may end up scrapped.

Either way, American troops facing new deployments abroad could be hitting the ground with a fresher, bigger-caliber rifle very soon.

Correction: Due to an editing error, an earlier version of this article stated that the AK-47 was a 7.62mm NATO rifle. The AK-47 uses 7.62 x 39mm ammunition.