“Wait a minute, this is the future. Where are all the phaser guns?" 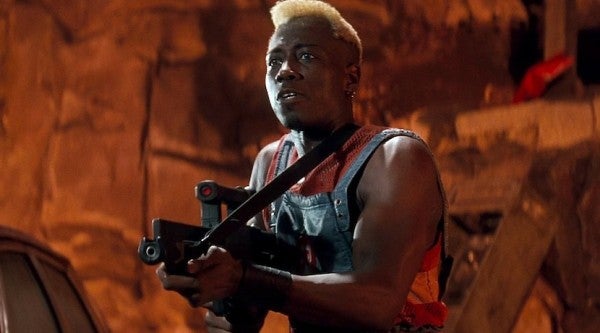 Decades before the U.S. military transitioned away from the M16 assault rifle in favor of the lightweight M4 carbine, the Army eyed an unusual-looking replacement for the Vietnam-era rifle: the boxy Heckler & Koch G11, the very same weapon that would appear years later as a futuristic energy rifle in the batshit crazy 1993 sci-fi action comedy “Demolition Man.”

Well, not the exact same weapon. The H&K G11, in development by NATO partners since the late 1960s, was one of four submissions tested in the late ‘80s by U.S. officials as part of the Advanced Combat Rifle (ACR) program that sought a rifle with a superior hit probability to the M16 of “spray and pray” fame.

The sleek gas-operated G11 was particularly noteworthy for chambering 4.72x33mm caseless ammunition and a bullpup design intended to eliminate the ejection cycle. A 1990 Army video on the ACR program claimed the rifle could fire in burst at an eye-popping rate of 2,100 rounds per minute (with a full-auto option at 400 rounds per minute).

Unfortunately, none of the submissions to the ACR program proved a compelling replacement for the M16A2 currently in use, and the program ended in 1990 after $300 million spent. H&K attempted to tailor the unusual G11 to military planners in its home country of Germany, but the end of the Cold War and reunification of the nation forced the G11 into obscurity with only 1,000 rifles ever produced.

Until 1993, that is. The rifle would see sort-of combat in an unusual new form as the “Magnetic Accelerator” 1X.31A particle weapons pilfered from a museum armory exhibit in 2032 by insane convict Simon Phoenix (Wesley Snipes) in “Demolition Man.”

The rifle itself was just a mockup cast of the G11, loaned to the production team by H&K; and outfitted with a bunch of embellishments and accessories fit for a Hollywood blockbuster.

According to the Internet Movie Firearms Database (the greatest website in the history of mankind), “Demolition Man” is the only movie that has featured the G11 in all its futuristic glory (although it’s appeared in military gaming franchises like Fallout and Call of Duty). And frankly, that’s a damn shame, because when T&P staff first stumbled across the Army’s 1990 ACR video pitching the G11, we had the same thought as Phoenix: “Wait a minute, this is the future. Where are all the phaser guns?”

There’s still a chance, maybe! Way back in 2004, the Lightweight Small Arms Technologies (LSAT) program borrowed technology from the G11 to explore the integration of the rifle’s caseless ammo system into a new Army light machine gun prototype — a move that suggests maybe, just maybe, some element of this boxy cannon could feel the ninja grip of combat troops some day.

Of course, that was 15 years ago, so it seems like a longshot. Until then, I’ll just be watching the museum shootout sequence on repeat — and wondering how to use those three seashells.

Related: Hudson was the belligerent Marine we all wanted to be in ‘Aliens’