Sleeves are officially back. 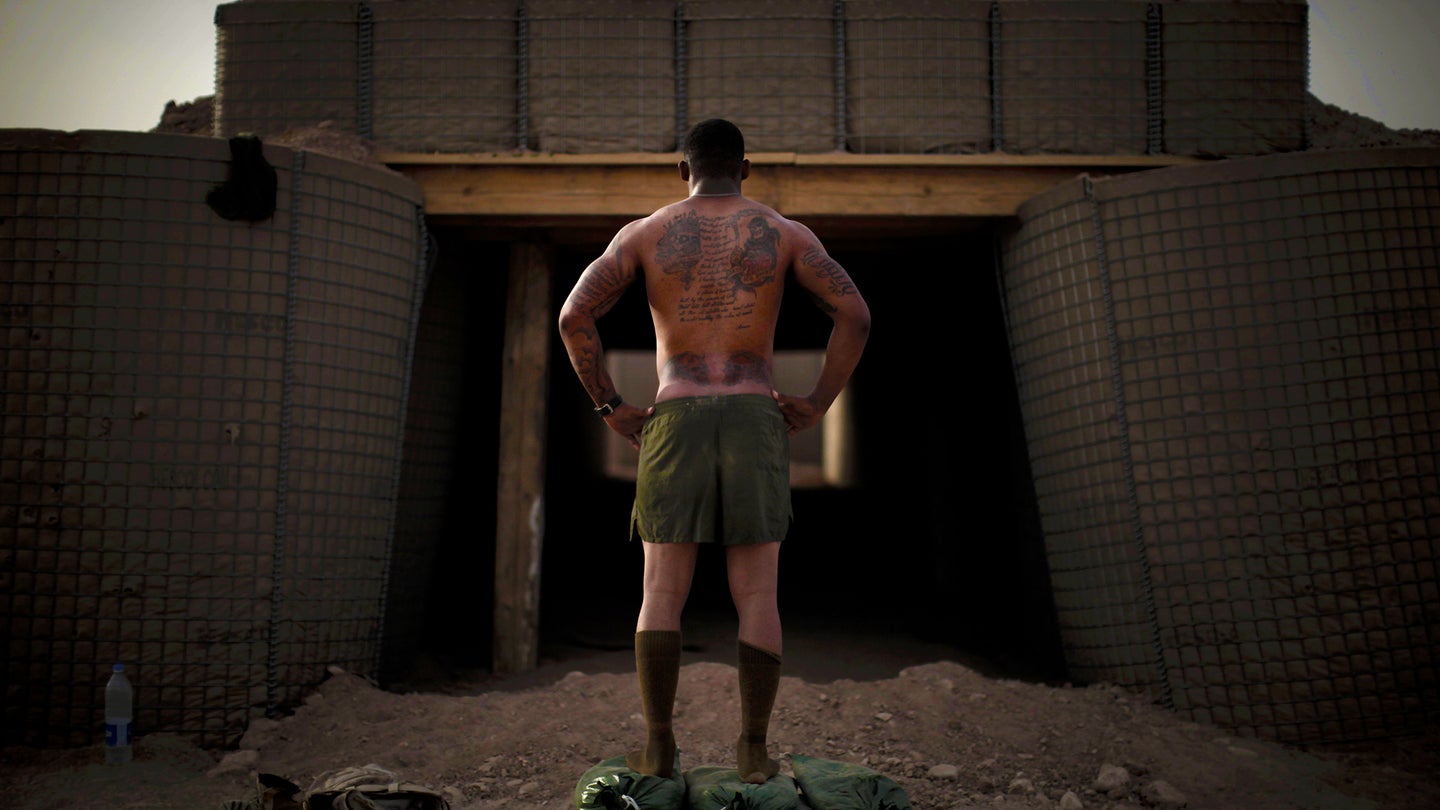 Corporal Jones Kendall, 20, of Slidell, Louisiania, poses to show his tattoos for a portrait at the entrance to a bunker at a base in Marjah, Helmand province, southern Afghanistan, on March 20, 2010. Most US marines sport several tattoos, commonly to tell the story of their lives as soldiers, to vanquish their fears, honour their comrades or to proclaim their love. AFP PHOTO/Mauricio LIMA (Photo credit should read MAURICIO LIMA/AFP via Getty Images).
SHARE

For the first time in nearly 15 years, Marines can have “sleeve tattoos” that cover most of their arms and legs under the latest revisions to the Marine Corps’ tattoo policy, which was released on Friday.

The Marine Corps banned sleeve tattoos in 2007 and Corps officials upheld the ban when the tattoo policy was updated in 2016 by prohibiting Marines from having tattoos around their elbows and knees.

Those restrictions on Marines’ arms and legs are not included in the most recent revisions to the tattoo policy, which says, “Marines may have tattoos on any area of the body, excluding the head, neck, and hands, in accordance with this bulletin.”

The policy does warn Marines that they could face career implications for their tattoos, such as being denied future duty assignments.

“Officers and enlisted Marines may continue to be assigned or allowed to serve on Special Duty Assignment, although assignment to ceremonial and other high visibility units may be restricted,” the policy says.

The new policy also greatly expands the definition of prohibited “extremist tattoos” while the Defense Department continues to work on a definition of what exactly extremist activity is. Since President Joe Biden assumed office in January, the Pentagon has taken steps to combat extremism within the military, such as ordering all units to hold stand-downs to talk about the problem.

The mob that attacked the U.S. Capitol on Jan. 6 included a retired Special Forces soldier along with other veterans as well as some service members, including an active-duty Marine lieutenant colonel. The Defense Department’s efforts to crack down on extremists serving in the military have been met with hostility from Republican lawmakers.

Now the Marine Corps’ tattoo policy describes extremist tattoos as those that, “Advocate, engage in, or support the forceful, violent, unconstitutional or otherwise unlawful overthrow of the government of the United States, any state, commonwealth, district, or territory in the United States; or advocates, engages in, or encourages military personnel or DoD or U.S. Coast Guard civilian employees to violate laws or disobey lawful orders or regulations for the purpose of disrupting military activities.”

Of all the changes listed in the latest version of the tattoo policy, the end of the ban on sleeve tattoos may be the most poignant because the Corps’ decision to prohibit such tattoos in March 2007 has been a wound that never healed.

The announcement, which came at the height of the Iraq War, followed a months-long review that began in August 2006.

Marines began getting more tattoos on their legs and arms during the Iraq War, said John L. Estrada, who served as the 15th Sergeant Major of the Marine Corps when the sleeve tattoo ban went into effect.

Some of those tattoos were sexual in nature, antisemitic, or offensive in other ways, prompting a robust debate throughout the Marine Corps’ leadership about whether the Corps needed to place limits on what types of tattoos Marines could get, Estrada said.

“Marines always had tattoos – let’s not get that wrong,” Estrada said. “But it was not as extreme until we noticed it popping up during the last war, the invasion of Iraq, which I participated in. The consensus with the leadership back then was that we needed to put this in check because it took away from the appearance of professionalism of Marines.”

Estrada, who spoke to Task & Purpose on Thursday before the latest changes to the tattoo policy had been announced, said he opposed allowing Marines to have sleeve tattoos again – a move which he said would be tantamount to “retreating.”

But for many Marines who came of age during the Post 9/11 wars, sleeve tattoos became a way to memorialize the fallen by inking the names of friends they had lost on their arms and legs.

The ban on sleeve tattoos was also an insult to some Marines who had served in combat. Brian Davenport, who was denied reenlistment because of his tattoos, told Marine Corps Times in 2017 that he felt the Marine Corps had suddenly determined that his combat experience in Afghanistan no longer mattered.

“You had leaders saying, ‘We don’t care that you’re a combat veteran,’” Davenport said at the time. “I had a second lieutenant, he was brand new and he’s like: ‘No one cares about Afghanistan. That’s over. We’re moving on. There’s a new Marine Corps.’”

“Competent and decorated Marines in the past and present who have proven to be an asset for the Marine Corps have been denied reenlistment and advancement in their field due to increasingly restrictive tattoo regulations,” Piala wrote in the Change.org petition. “This creates an increasingly damaging stigma, within which a Marine who has or desires tattoos outside of the standing regulations is seen as lacking discipline. There exists no correlation, positive or negative, between tattoos and effectiveness, efficiency, discipline, or lethality.”