Recent comments from the commandant of the Marine Corps, Gen. Robert Neller, made clear that 2017 was far from a... 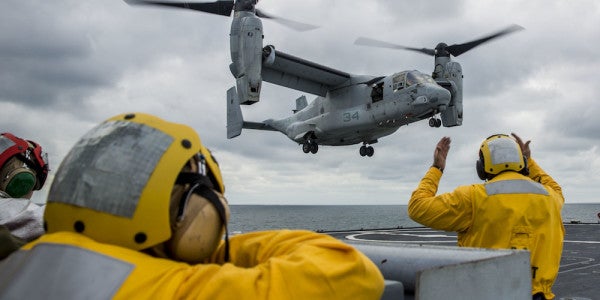 Recent comments from the commandant of the Marine Corps, Gen. Robert Neller, made clear that 2017 was far from a banner year for Marine Corps aviation in terms of safety. The 10 Class A aviation mishaps — mishaps involving manned aircraft — are the most in over a decade. Despite the age of aircraft and operational commitments around the world, the commandant explained that the high rate of aviation mishaps was not generally due to the material condition of the airplanes. The 10 Class A mishaps, where a Class A mishap is defined as an accident that resulted in death, a permanent total disability, or more than $2 million in damage, are reminiscent of another difficult time in aviation safety history. The previous spike in aviation mishaps, in 2004, was a watershed year for aviation safety in the Marine Corps.

Recognizing an institutional crisis due to 18 Class A mishaps that year, the leadership of the Marine Corps enacted a number of changes to policies and procedures aimed at turning the tide of a completely unsustainable mishap trend. The effort worked in that 2009 and 2010 were the safest years on record for Marine Corps Aviation with only four Class A mishaps during each of those years. Since then, however, the Class A mishap rate has slowly creeped back up to its current level.

The commercial airline industry experienced its own period of institution safety crisis. In the 1970s, 101 people died aboard Eastern Airlines Flight 401 after it slowly descended in darkness and crashed into the Everglades while the aircrew attempted to troubleshoot a problem; 10 people died when United Airlines Flight 173 ran out of fuel and crashed in Portland, Oregon while the crew also attempted to troubleshoot a problem; and 583 people died when two Boeing 747s collided on a fog-shrouded runway at Tenerife Airport in the Canary Islands. Recognizing the problem, the airlines enforced change, and in the decades following, have been continuously improving their risk-management tools. These landmark accidents gave rise to the most notable aviation risk management tool: Crew Resource Management, or CRM. In essence, CRM’s goal is to train the aircrew to work as a team, communicate effectively, and utilize all available resources to address problems in the cockpit. In 2017, commercial airlines in the United States marked their eighth consecutive year with no fatal accidents.

By contrast, the Marine Corps’ aviation risk-management tools have become stale and lack the energy to stop mishap rates from rising. For example, the substance of CRM in the Navy and Marine Corps — the seven critical skills of decision-making, assertiveness, mission analysis, communication, leadership, adaptability/flexibility, and situational awareness — has remained unchanged over decades. Even in the record-setting years of 2009 and 2010, three-fourths of the Class A mishaps were due to aircrew error that could have been mitigated by effective CRM. CRM within the commercial aviation industry has evolved with time and technology trends. In this regard, the Navy and Marine Corps should follow the airlines’ example of effective risk management.

First, scrap all current models for training and evaluating aviation risk management. The current mishap trend presents a needed opportunity to fuse best risk-management practices and innovative ideas from across all services, the airline industry, the cargo aviation industry, air traffic control centers, and senior or retired aviators of all backgrounds to determine what is effective, what is intellectually challenging, and what pushes aviators and aviation support activities out of “comfort zones” that facilitate numerous incidents. If flight time is still going to be scarce and budget environments constrained for aviation support activities, aviators need the risk-management substance that challenges their fundamental risk management skills for today’s environment.

Second, the tools of teaching risk management have to evolve with the substance evolution of risk management. Risk mitigation cannot be relegated to checklists and score cards alone. Risk management is a “living and breathing” decision tool; it is perpetual, it has to be mentally challenging, and it needs to be taught that way. The difficulty in implementing risk-management teaching and training is that the concept of risk mitigation can sometimes feel counter to the offensive mindset that is a source of pride for Marines, but the current situation demands wholesale change.

Finally, challenging risk-management training has to extend to every stakeholder in aviation. This includes aircraft maintenance crews, air traffic controllers, airfield operations crews, airfield maintenance crews, and crash and rescue units. One example of a program that can help mitigate the current mishap trend is Maintenance Resource Management, or MRM. MRM, like CRM, is a program designed to facilitate communication, teamwork, and problem resolution among airplane maintenance crews. Both the Coast Guard and the Air Force have instituted these types of programs to address maintenance safety issues. Effective risk-management instruction cannot be the private property of aircrew alone. Instead, it must extend to every element of aviation that has an impact on the safe operations of airplanes.

With the fielding of the Joint Strike Fighter, the transition of almost every airframe, a challenging budget environment, and the same operational commitments, 2017 should serve as a massive call to action for decision-makers to provide the right mechanisms for aviators and support staffs functioning in this environment to be safe in accomplishing missions. Especially since this appears to be the “new normal” for the foreseeable future, an energetic response is critical to address all of what occurred in 2017. If the response is anything less than that of the offensive mindset that is the pride of Marines everywhere, this same conversation will occur at this time next year.