On the morning of Aug. 20, the USS John S. McCain reported a collision with a commercial tanker, the Alnic... 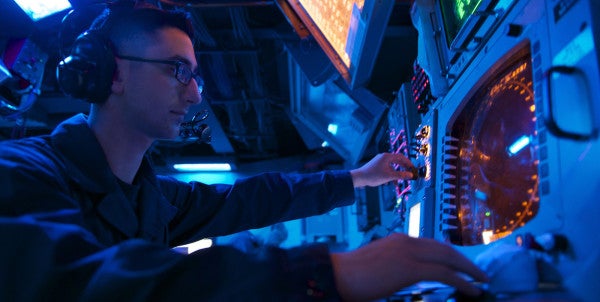 On the morning of Aug. 20, the USS John S. McCain reported a collision with a commercial tanker, the Alnic MC. The incident, which left 10 sailors missing, marks the second collision at sea in for the Navy’s 7th Fleet in just two months, after the USS Fitzgerald struck a merchant vessel in June. It’s also fleet’s fourth major mishap at sea in 2017.

Incidents like this are extraordinary due to the extensive underway watch team organization aboard Arleigh Burke-class guided missile destroyers like the McCain and Fitzgerald. There are two watchstander nerve centers aboard a destroyer underway: one in the combat information center, or CIC, and another on the vessel’s bridge. Both teams are responsible for backing one another up and ensuring the safe navigation of the ship.

In CIC, there are no windows for lookout purposes, but several sailors, both enlisted and commissioned, monitor radar screens and other military sensors in hopes of catching other vessels early for contact avoidance. CIC is managed by the combat information center watch officer, usually a junior officer early in their qualification process to become a fully trained surface warfare officer.

During a normal watch, the CIC watch officer reports to a senior tactical action officer, who is responsible for the tactical maneuvering of the ship — and who often serves as a guiding presence for the bridge watchstanders, due to his or her experience and time at sea. The rest of the watch team usually includes sailors of varying ranks scanning the surface, air, and subsurface. Other watchstations in the room, staffed with seven to 10 sailors, relay updates to the tactical action officer to assist in tactical decision-making.

On the bridge, there are at least five watchstanders, including no fewer than two junior officers tasked with ensuring the ship gets where it needs to be and avoids collisions. The bridge team is led by the officer of the deck, responsible for navigation in the captain’s absence. It’s worth noting that officers of the deck vary in quality and experience: There is massive experiential difference between a recently qualified ensign taking the watch alone for the first time and, say, a seasoned second-tour qualified lieutenant junior grade with a surface warfare officer qualification pin.

That said, the officer of the deck is far from alone in his duties. A lesser trained junior officer of the deck shadows him as an understudy, of course. The conning officer is responsible for ordering the helmsman on a given course and speed, while the quartermaster of the watch ensures the ship is staying on the prescribed course and speed. Finally, the boatswain’s mate of the watch handles the ship’s internal PA system, taking contact reports from the aft lookout, and training the young helmsman, among other responsibilities.

In other words, Navy ships don’t sail blindly toward the horizon. And in addition to the electronic eyes in combat and the actual eyes inside the bridge, we’ve got folks outside in the weather. There are at least two, but often three, lookouts at all times, using binoculars and the naked eyes to scan the horizon for contacts that radar might miss. There is always one lookout aft, and captains often add a port and starboard lookout, depending on operational desires and requirements. All report directly to the bridge, with the CIC looped in, through sound-powered telephones. However, the expectation on all ships is that everyone is a lookout, and it is up to everyone to maintain a proper watch in support of the safe navigation of the ship.

Beyond CIC and the bridge, there are roving watchstanders operating the ship. During special evolutions — such as pulling in and out of port, refueling at sea, and transiting dangerous straits or shipping lanes — the commanding officer and executive officer oversee the whole process from the bridge. During special evolutions, more sailors are added to the watch teams across the ship, and specific briefings ensure the entire crew is aware of potential operational risks, safety hazards, and contingency plans.

When collisions occur, the ship's crew springs into action. A watchstander sounds the collision alarm and feeds the crew as much information as possible about the coming contact while sailors brace for impact. At this point, a bridge watchstander will have pulled the lever for one long blast of the ship’s whistle (a loud horn), a last-ditch effort to avert a collision. After contact, the watertight doors are verified shut to prevent water from spreading outside the area of impact while damage control teams begin repair efforts across the ship.

During a crew’s response, the damage control assistant assumes control of all damage control efforts from the central engineering hub to keep the ship afloat, organizing dewatering and shoring — wood or metal placed to keep the hull or decks from caving in and ensure watertight integrity. The primary goal for the damage control assistant is to keep the ship afloat and preserve the lives of the entire crew; the secondary goal is to save as many lives from the affected area as possible. When push comes to shove, ensuring watertight integrity is prioritized for the safety of the whole, and individual lives may be lost in the process.

Collisions are rare in the U.S. Navy because of the training, redundant processes, and slew of electronic systems in place to prevent such occurrences. When they do occur, we know that processes, procedures, and, sometimes, people have failed. We owe it to taxpayers and service members to do everything in our power to understand these failures and figure out ways to mitigate risks. There must be a better way.