It’s been a rough year the Navy’s 7th fleet, marred by four major surface mishaps for the Pacific-based armada —... 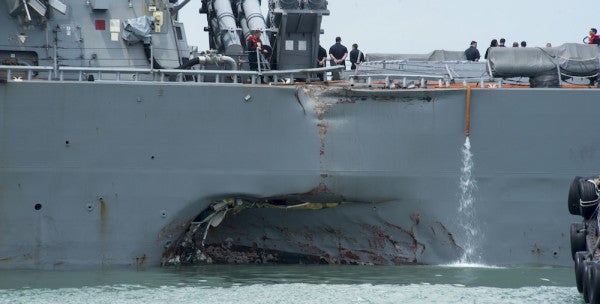 It’s been a rough year the Navy’s 7th fleet, marred by four major surface mishaps for the Pacific-based armada — two of which cost the lives of 17 sailors. Now, the branch is scrambling to address the root causes of the fleet’s startling accident rate.

Since the Navy announced its plan to make changes during a Senate Armed Services Committee hearing Sept. 19, officials have made four major moves — and the Chief of Naval Operations says there are many still to come. “I am accountable for the safe and effective operations of our Navy, and we will fix this,” CNO Adm. John Richardson told lawmakers during the hearing. “I own this problem.”

One of the major lessons to emerge from the deadly collisions of the USS Fitzpatrick and the USS John McCain is that sailors are tired — way too tired to be effective on watch. In addition to their regularly scheduled duties during deployment, many are also billed with watch duty additionally, and the 7th Fleet has reached a breaking point.

Task & Purpose previously reported that in a two-year RAND study, the Navy was worst in terms of sleep. And the more deployments, the worse off sailors were. Those that deployed before “had greater sleep-related daytime impairment” than those without, according to the study. And some sailors suggest they’ve worked up to 100 hours a week at certain points during deployment, a trend Sen. John McCain assailed in a Sept. 19 hearing with naval officials.

According to Naval Surface Force-Pacific commander Vice Adm. Tom Rowden’s memo on Sept. 19, the branch is working now to come up with a plan to give sailors more rest between watches. The plan is to observe circadian rhythm, which means that the new schedules will better adhere to the 24-hour cycle of sleep and wakefulness without pushing sailors well past their physical and mental limits.

“Fatigue has measurable negative effects on readiness, effectiveness and safety,” Rowden said of the Navy’s sleep schedules in 2016. “After a day without sleep, human performance drops to dangerously ineffective levels.”

Ships in heavily-trafficked areas will now broadcast their coordinates.

The Navy will now utilize an “Automatic Identification System” to broadcast coordinates of ships in busy areas, NPR reported Oct. 2. AIS is an autonomous tracking tool that transmits location information to other vessels equipped with the system.

“AIS has been around for some 20 years and has long been required aboard all commercial vessels,” according to NPR. “It is used to share vital information among ships, including the type of vessel, its name, speed, location and whether it might be on a collision course with another ship.”

Though this means that casual observers across the globe may now have access to Navy ship locations, officials are working to come up with a way to reconcile situational awareness with stealth and security.

“It's all about operational security,” Vice Adm. William Douglas Crowder, a former commander of 7th Fleet and deputy chief of naval operations, told NPR. “We don't want to be broadcasting our exact position to everyone.”

The branch will return to manual ship tracking methods.

Failed ship tracking has proven costly and deadly for sailors. As evidenced by the collisions of the USS Fitzgerald and the USS John McCain, which both ran into commercial vessels on mornings before the sun had risen, electronic tracking at night is dangerous.

On Sept. 27, The New York Times obtained a new directive that stated the Navy will utilize “chartwork and precise piloting” to track vessels in the commercial shipping lanes in the area of the Pacific Ocean where 7th Fleet’s most deadly collisions have occurred, with Commanders requiring sailors “to use old-fashioned compasses, pencils and paper to help track potential hazards, as well as reducing a captain’s discretion to define what rules the watch team follows if the captain is not on the ship’s bridge.”

The branch is cleaning house on ineffective commanders.

The Navy isn’t shy about booting commanders: Between 2009 and 2014, Stars and Stripes reported, 90 Navy skippers lost their commands for “indiscretions ranging from driving under the influence to having inappropriate relationships.” And the same appears to be the case with regards to deadly collisions.

Task & Purpose reported that after this summer, the branch removed two senior 7th Fleet officers over “a loss of confidence in their ability to command” on Sept. 18. Rear Adm. Charles Williams, who was chief of the Navy’s largest forward-deployed battle force, was let go, as was Capt. Jeffrey Bennett, who served as the commander of the fleet’s destroyer squadron.

Williams and Bennett’s removal marked the fifth and sixth firings in 7th Fleet as a result of the mishaps. 7th Fleet commander Vice Adm. Joseph Aucoin also lost his command in August. His removal followed shortly after the captain of the Fitzgerald, in addition to its executive officer, and its command master chief were all fired from their respective jobs.

Rowden is also retiring from his position as Naval Surface Force-Pacific commander early, though he did not officially state that this decision was a result of the collisions and other mishaps.

(Update: This post has been correct the fact that Vice Adm. Rowden’s comments came from an All Naval Surface Forces Memo dated Sep. 19, not a Sep. 20 farewell address. It has also been updated to reflect that Rowden’s request for early retirement would release him from the service several months before his planned separation date, not a year early, as was previously stated.)