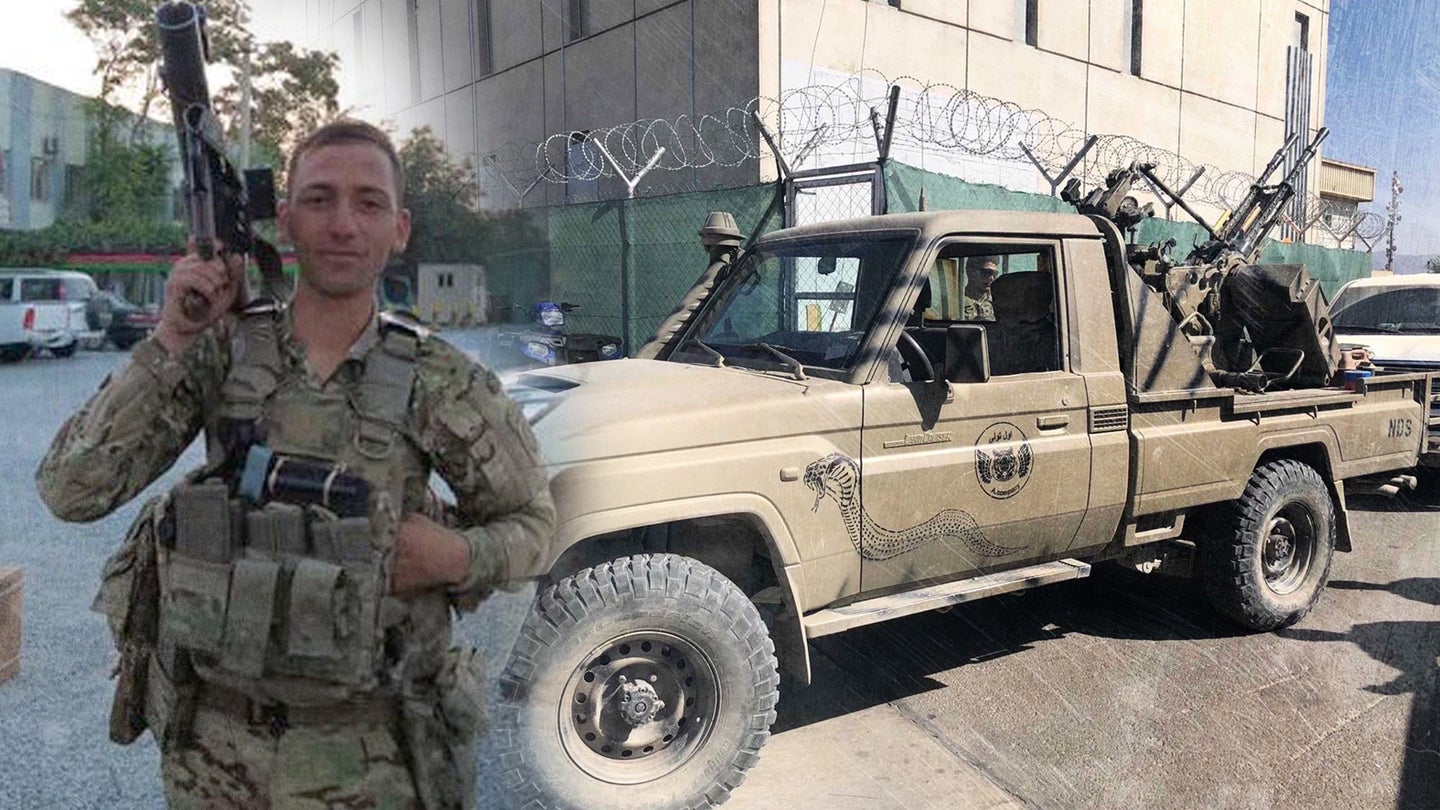 A U.S. Army soldier who helped secure the Hamid Karzai International Airport during the withdrawal from Afghanistan by training other soldiers how to use a Toyota technical’s anti-aircraft gun — after they’d traded two cans of dipping tobacco for it — was recently promoted.

During an on-the-spot promotion at Fort Bragg, North Carolina, Alsajjad Al Lami was promoted from private first class to the rank of specialist by Army Chief of Staff Gen. James McConville. Al Lami was one of the soldiers who was recently profiled by Task & Purpose for their actions during the chaotic evacuation of Americans and Afghans from the country as the Taliban consolidated their power and swept into the capital of Kabul.

In the video, McConville can be heard joking with Al Lami, as he asks if he’s ever met a “four star” general, as he hands the soldier a challenge coin.

“First I’m going to give you a coin, okay?” McConville says in the video, which was posted to Twitter by the Sgt. Maj. of the Army Michael Grinston. “Here’s the deal with that coin. You get to keep that coin if you finish your tour successfully. But if you get in trouble and you don’t finish your tour successfully, you have to come to the Pentagon and give me it back. I’m not going to get it back, am I?”

To which Al Lami replies “no sir.”

Al Lami was one of the soldiers with 1st Battalion, 504th Parachute Infantry Regiment who landed at the Kabul airport early on during the evacuation efforts and immediately set about establishing security — which is a euphemistic way of saying that they did a lot of grunt work setting up and then manning guard posts and bolstering those defenses. And those defensive measures were crucial. On the other side of the airport’s walls, armed Taliban fighters operated openly, at times within 30 meters of U.S. troops, if not far closer.

Because the mission’s urgency required that the soldiers deploy quickly, and in enough force to secure the area, that left little room on transport aircraft for heavier equipment, like gun trucks. Though often used for mounted patrols or convoy operations, vehicles like MRAPs and M-ATVs can function as a static defense — a fighting position — and serve as both a visual deterrent and provide fire support in case of an attack.

“We just had our basic weapons, we didn’t have any heavy machine guns, any gun trucks or anything,” said Al Lami previously told Task & Purpose.

That said, soldiers are nothing if not resourceful, and they can make do in most any situation. When they noticed that a group of Afghan troops were preparing to leave — and abandon their Afghan National Army Toyota Land Cruiser, along with its Russian-made 14.5mm ZPU-2 anti-aircraft gun — they decided to make a deal.

“There were two guys standing by the truck, and we asked them if they had the keys,” Al Lami said. “They were like, ‘Yeah we do have the keys.’ And they gave us the keys for two cans of dip.”

However, the keys alone wouldn’t have made much of a difference, had Al Lami not been there. Born in Iraq, the 25-year-old Al Lami had to complete a mandatory service obligation in Iraq’s military, though he only ended up serving for six months before leaving for college in the U.S.

Because of his time in the Iraqi Army, Al Lami knew how to use the truck’s weapon system — from firing, to loading, to barrel changes — and was able to teach his fellow soldiers. For days, the pickup truck with its ZPU-2 was used by American troops at the airport as a show of force to the Taliban fighters on the other side of the gate.

“It’s hard to imagine the stars aligning any more perfectly for Bravo Company than they did on Aug. 17,” Task & Purpose’s Haley Britzky wrote on Oct. 12. “They had the keys to the Toyota mounted with an anti-aircraft gun, which was making the Taliban roughly 100 feet away think twice about stepping out of line. And they had a paratrooper uniquely qualified to teach the rest of them how to operate it: Al Lami knew how to work the ZPU-2 thanks to his short stint in the Iraqi military.”

As the evacuation drew down, the Toyota technical was loaded into a U.S. transport plane and shipped to Kuwait where it’s awaiting final approval to be brought back to the U.S. and showcased at the 82nd Airborne Division War Memorial and Museum.

In a previous statement to Task & Purpose, Maj. Gen. Christopher Donahue, the 82nd Airborne Division commander, said that the truck and the story it tells is “emblematic of the grit, discipline, and extreme competence” of the U.S. soldiers who served at the airport during the chaotic and often tragic withdrawal.

“This truck will sit at the 82nd Airborne Museum so that our Paratroopers, their families and future generations to come will know that when faced with a mission of unprecedented scope and complexity, the Paratroopers rose to meet this challenge,” Donahue said.