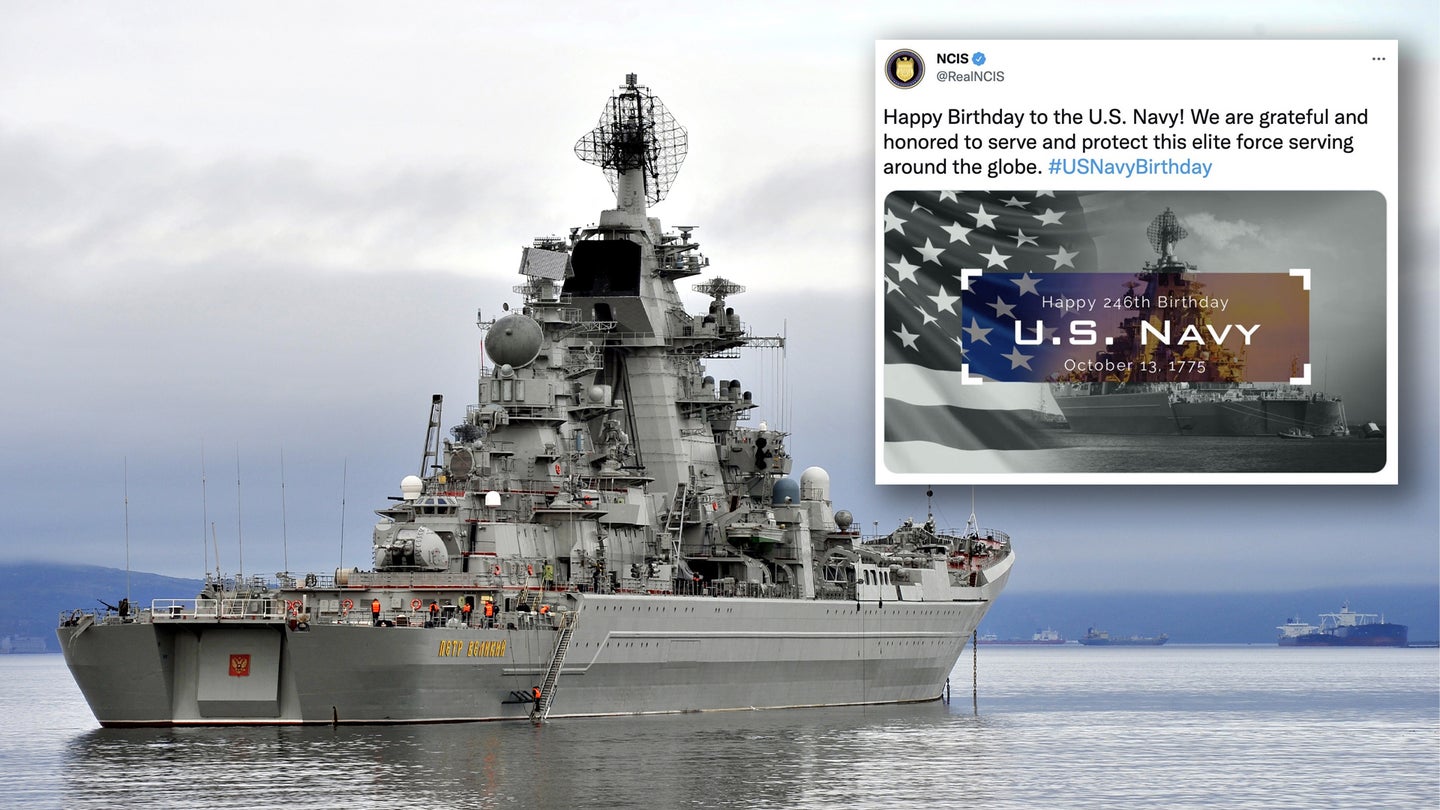 Happy birthday to all the navies, I guess. (Photo by Lev Fedoseyev/TASS via Getty Images/screenshot via Twitter).
SHARE

Wednesday marked the U.S. Navy’s 246th year of kicking ass on the high seas, which means that someone once again took to the internet to wish the seafaring service a happy birthday by sharing a photo of a warship belonging to another navy.

In this case, the “someone” was actually the Twitter account for the law enforcement agency of the U.S. Navy: the Naval Criminal Investigative Service. (Oh, the irony.)

The tweet, which has since been deleted, raised some eyebrows online because while it did wish the Navy a happy 246th Birthday, it did so with a photo composite showing an American flag alongside a Russian Kirov-class battlecruiser.

“NCIS yesterday mistakenly used an incorrectly labeled stock image of a Russian ship in a tweet commemorating the 246th anniversary of the U.S. Navy,” said NCIS spokesperson Jeff Houston in a statement that was provided to Task & Purpose by U.S. Navy public affairs. “NCIS is refining its internal review processes to prevent future errors. We apologize to the Department of the Navy’s warfighters for this oversight and thank them for their vital service to our nation.”

But it wasn’t just NCIS that dove headfirst into a sea of embarrassment, others quickly took part in what has become a sort of accidental tradition.

Republican Sen. Jim Risch from Idaho hopped into the fray and inadvertently moved the faux-pas out of the Cold War era and into the modern strategic environment by sending his well wishes alongside a photo of a warship manufactured by China.

That error was spotted by Politico’s Dave Brown, who had a field day flagging that, and other mistakes:

This is hardly the first time this has happened. In 2019, Congressman Brian Mast (R-Fla.), an Army veteran, tweeted out a photo of a Kirov-class battlecruiser — the same exact class of ship that NCIS shared a photo of — in a birthday post to the Navy.

The gaffe has actually become so consistent that on the service’s birthday folks have started to joke about deliberately setting people up for it.

We even debated intentionally sharing an image of a Coast Guard cutter on the Navy’s birthday, but then thought better of it given just how common of a mistake this is.

Fortunately, there is a hassle (and mockery) free way for folks to celebrate the birthday of America’s 246-year-old naval service and that’s by going to the U.S. Navy to get your photos. Those can be easily found on the military’s imagery database, the Defense Visual Information Distribution Service (DVIDS), through the Navy’s official social media pages, or on the service’s Flickr account.

With that said, we’d like to wish the Navy a happy belated 246th birthday!

Update: This article was updated after publication with a statement from NCIS provided to Task & Purpose by Navy public affairs about the photo shared by the official Twitter account for NCIS.