The routine of getting the award has become so perfunctory that it's essentially meaningless. 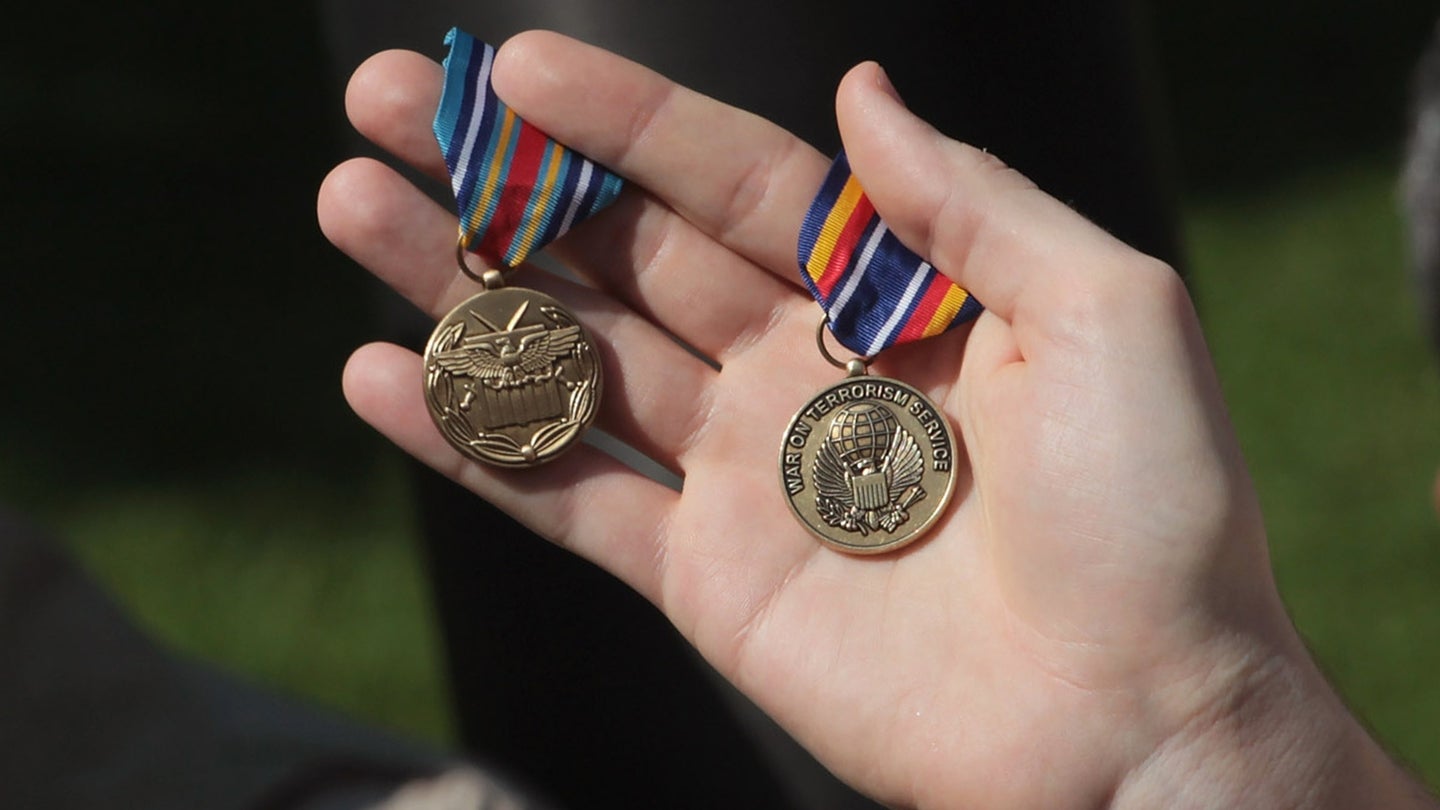 Over the last 20 years, the Global War on Terrorism Service Medal has largely been seen as a freebie award by troops, but those days are drawing to a close. (Scott Olson/Getty Images).
SHARE

A 19-year-old Marine private completing his first month in the Fleet Marine Forces had to go to his nearest post exchange to buy a medal this morning. Officially, this medal recognizes his support for operations to counter terrorism after the attacks of Sept. 11, 2001. In reality, everyone gets this medal regardless of their job in the military, or whether they performed any tasks that had anything to do with bringing terrorists to justice, either at their home station or while deployed overseas. No ceremony accompanied this purchase (unless you count uniform inspections from the Marine’s fire team leader, squad leader, and platoon sergeant to ensure that his new medal was affixed to his Service “Charlie” uniform shirt with the same precision with which he aimed his service rifle on qualification day). In fact, no written citation accompanied this medal, either. This routine, performed continuously across the United States armed forces for close to two decades, has become so perfunctory as to become essentially meaningless.

It is past time for the Department of Defense to stop awarding the Global War on Terrorism Service Medal. Continuing the current practice of awarding the medal to every service member who completes 30 days in an operational unit, regardless of their participation in any deployment or operation related to counterterrorism, devalues their service and hinders the military’s widespread understanding of the current strategic reality.

Napoleon famously recognized that “a soldier will fight long and hard for a bit of colored ribbon.” Though perhaps intended cynically, his words are an incisive commentary on human nature. Medals are a part of military culture, and although most service members will act outwardly to the contrary, most would admit among themselves in private that they do in fact care about decorations – or at least did when they were young. Perhaps the best evidence of this is the value American society assigns to military service, and even the incidences of “stolen valor” among those who never served themselves. Continuing to award the GWOT Service Medal to service members in this way – as a sort of military participation trophy unaccompanied by any charade of ceremony, respect, or cultural appreciation for its meaning – perversely devalues their service. Medals are also a way for the military to honor its history, both individually and collectively. That service is now beginning to take on a much different form than during the zenith of the Global War on Terrorism, however.

Counterterrorism and counterinsurgency operations in Afghanistan, Iraq, and countless other climes and places have saturated the U.S. military’s culture for an entire generation. The Trump Administration’s 2018 National Defense Strategy rightly recognized that “inter-state strategic competition, not terrorism, is now the primary concern in U.S. national security.” Senior Department of Defense leadership should not further delay in officially punctuating the widespread U.S. military focus on counterterrorism and counterinsurgency by formally ending the eligibility for the GWOT Service Medal. Continuing eligibility for the award prolongs institutional connection to the wars in Afghanistan, Iraq, and elsewhere. It hinders widespread cultural embrace of the realities of strategic competition with China that our strategic documents profess, precisely when the scale and scope of this challenge demand full attention.

Of course, despite the United States’ unceremonious withdrawal from Afghanistan, so-called over-the-horizon counterterrorism operations will continue. Many of my friends still deploy to the Middle East, Central Asia, Africa, and elsewhere as members of special operations units that continue to hunt terrorists abroad. This is not the status quo for which the GWOT Service Medal was intended, however. This vastly smaller number of personnel who will continue to participate in, or directly support, operations against terrorist organizations should continue to be eligible for the GWOT Expeditionary Medal and other named campaign decorations. These awards are far more prescriptive in their temporal and geographical eligibility criteria than the GWOT Service Medal, carry much more significance, and do not unduly prejudice the wider military culture against the shift to great power competition.

As America continues to process the end to its widespread involvement in Afghanistan, the Department of Defense would do well to align its awards policy with its strategic priorities and stop awarding the GWOT Service Medal. By ending the practice now, while the military and the larger national security establishment are still mostly in a moment of strategic inflection, it can preserve what honor and significance remain intrinsic to the GWOT Service Medal for those that have earned it, and show all the 19-year-old Marines, Sailors, Soldiers, Airmen, and Guardians that they face new challenges in the defense of the nation.

Austin Dahmer is a Marine veteran and a recipient of the GWOT Service Medal. He is a national security analyst, a graduate student at Georgetown University, and a graduate of the U.S. Naval Academy. The views presented are his own.