The Military Needs To Get A Handle On Its Awards Process

Gen. Dwight D. Eisenhower, the man who led Allied forces to victory in Europe during World War II, had 10... 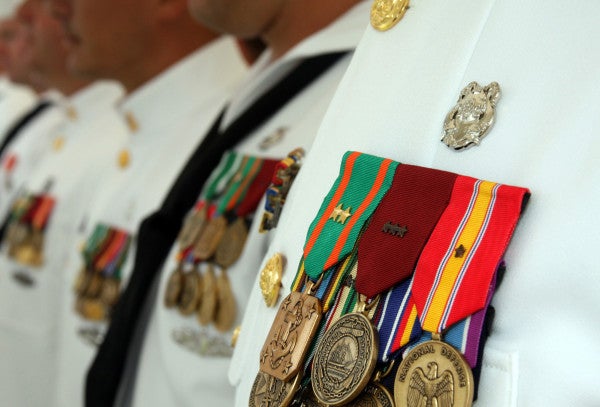 Gen. Dwight D. Eisenhower, the man who led Allied forces to victory in Europe during World War II, had 10 ribbons on his uniform when he left the military after nearly 34 years of commissioned service. I checked into the visitors’ quarters on an Air Force base awhile back, and the 20-something check-in clerk had more ribbons than that.

Something has gone seriously awry in our awards process. While each of the services will justify its policies on a case-by-case basis, collectively there is a problem. If you were to walk around a typical base and didn’t know the meanings of the ribbons, you would either think that every service member is Audie Murphy, or that the military is a grown-up version of summer camp, where everyone gets participation ribbons. The second is closer to the truth.

Participation ribbons are where a lot of the excess comes in. Campaign medals honor serving in major campaigns and expeditions. Whether you fought at Korea, Vietnam, Afghanistan, or Iraq, that service is worth commemorating. Somewhere along the line, things got out of hand. I have two National Defense Service medals, and while I appreciated my first as a nice starter kit to keep my uniform from being completely blank when I joined, it’s not as if I swell with pride wearing it. The reason I don’t is because everybody gets one.

Related: The Military Needs To Overhaul Its Personnel Management Practices »

The point of an award is to show serving with some type of distinction, not just serving. A few years back, the Global War on Terrorism Service Medal joined the National Defense Service Medal in the pantheon of uselessness. It’s given to everyone serving in the military during the “War on Terror,” which one might think was already covered by the National Defense Service Medal, but apparently one medal wasn’t enough. Now everyone in the military has two medals for successfully breathing.

If we first eliminate every award given for just showing up other than campaign awards, a lot of the problem stops right there. Awards such as the Humanitarian Service Medal, Sea Service Deployment Ribbon, the NCO Professional Development Ribbon, the Army Service Ribbon, and the Air Force Training Ribbon should be cast in the dustbin of history. Same for all of the special duty ribbons for recruiters, drill instructors, honor guards, and the rest throughout the services. You did your job. That’s what your paycheck commemorates. Why does that need a special ribbon?

Some people like the idea of looking at someone’s ribbon stack and knowing everywhere he or she has been. That’s what talking to people is for. We should honor serving abroad in combat theaters — that’s what military service is about, after all, but we don’t need to wear our entire personnel files on our chests.

“Ooh, he’s done two tours and doesn’t have a personal award? Who’d he piss off?”

It’s hard to rein in on a unit level — as in arms control, if not everyone does it at the same time, you only end up hurting your own people. Haphazardly applied quota systems tend to make awards a matter of timing, just like budgets. At some points in an awards cycle, you need to walk on water to earn an award. At others, it may just require fogging a mirror.

This requires a Department of Defense-wide response. We need to dispense with end-of-tour awards. Your reward for a solid tour should be a solid fitness/efficiency report. Awards should be for discrete actions over a defined period of time — i.e., “impact” awards. If you really are a rock star, you will have had at least one particular task you shined at during a tour.

We can also phase out duplicative individual service and joint awards. Each service has its own individual medals for its lower awards, e.g., Navy and Marine Corps/Air Force/Army Achievement medals. There are also “joint” versions of these for serving in joint commands. The DoD should create uniform standards for these and institute a “Military Achievement Medal,” “Military Commendation Medal,” etc. To avoid “stack” creep during the transition, anyone who already has an individual service medal would receive his Military Commendation Medal as a device on his existing service award.

These medals are also awarded on wildly different difficulty scales. The lowest achievement medal is given for things ranging all the way from finding a piece of unsafe equipment to rewarding a entire four-year tour. We need to get used to using letters of commendation, meritorious masts, and letters of appreciation presented in formations and put in personnel files as rewards for day-to-day excellence and save the medals for the truly outstanding.

The services have generally been better at maintaining the integrity of combat awards. However, some rudder steers will help ensure that those who go above and beyond in combat operations receive the recognition they deserve. The Bronze Star in particular has become a fixture of controversy, because when given with a Combat Distinguishing Device, or “V,” it rewards valor in combat, while without, it rewards meritorious service in a combat theater. Let’s simplify that and award it only for actions in actual combat. Actions in a combat theater not involving contact with the enemy should receive a Meritorious Service Medal or similar award.

Additionally, the services have been inconsistent both internally and between themselves at awarding the two top awards: the Medal of Honor and the respective service crosses. For example, the Army is alleged to have downgraded a soldier’s recommendation for the Medal of Honor to a Silver Star due to possible non-related misconduct. Once these high-level awards pass a colonel’s desk, they need to go to a DoD-wide joint awards board. These awards are too hallowed to be given easily or denied capriciously.

De-escalating the awards arms race will better recognize the truly outstanding while not making senior personnel look like third-world dictators.