“The man, he woke something up in me,” Navy veteran John Garofalo said of President Donald Trump on Fox News... 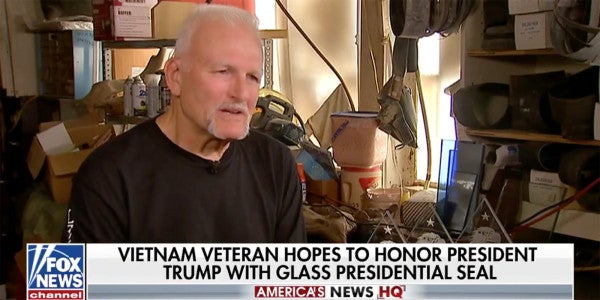 “The man, he woke something up in me,” Navy veteran John Garofalo said of President Donald Trump on Fox News Channel earlier this month. It turns out that what awoke in Garofalo was a burning desire to be famous and celebrated for some bullshit that he made up.

Garofalo, a 72-year-old New York glassmaker, became instafamous for a now-retracted viral Fox News segment aired Oct. 8, in which he was extolled for the mammoth glass presidential seal he’d constructed as a tribute to POTUS 45.

“John Garofalo believes in President Trump — so much so, he created this handcut 4-foot 150-pound glass-and-bronze presidential seal of the United States as a gift for the president,” Fox News reporter Bryan Llenas said at the segment’s start.

But that wasn’t the real hook: Garofalo, according to Fox News, was a plankowner in the original SEAL teams. He was a bonafide goddamn war hero, who had bled — and gone missing — for his country. I think you know where I’m going with this, so I’ll just let Navy Times crack reporter Geoff Ziezulewicz explain what happened next:

“He was listed twice during his service in Vietnam as missing in action,” Llenas noted at the segment’s close.

But when Navy Times contacted Garofalo Thursday, Garofalo admitted he had lied and never served in Vietnam, never received a Purple Heart and was never a SEAL.

Garofalo is a Navy veteran: He did a four-year stint from ’63 to ’67 as an aviation boatswain’s mate. Which is a pretty important rating to the Navy’s squadrons, but it’s not exactly traipsing around on anti-Vietcong patrols in tiger-stripe cammies with Dick Marcinko and Jim “Patches” Watson. As Ziezulewicz puts it: “The closest [Garofalo] ever got to Vietnam was a tour in Rota, Spain.”

This was no crime of passion. Garofalo’s been humping this false SEAL story for years, and he’s thrown off plenty of signs of deliberate, calculated shitheartedness, like when he showed Fox News a pile of decorations that included a Vietnam Service Medal and a Purple Heart with two stars:

Ziezulewicz found that Garofalo had requested a record of his own military awards and decorations in 1993, and the only thing on it was a National Defense medal. “Did not served (sic) with a unit/vessel awarded the Vietnam Service Medal, or any unit citations,” the record stated.

How does Garofalo explain himself? “It got bigger and bigger,” he told Navy Times over the phone. “What I did I‘m ashamed of, and I didn’t mean to cause so much disgrace to the SEALs.”

There are dozens of reasons people steal valor, all of them stupid. Some do it for financial gain, or to get material benefits they wouldn’t otherwise. Some do it to snow the people they love. Some do it because they’re ashamed of themselves and their shortcomings. But possibly the stupidest reason you can steal valor and gain notoriety from it is to feed contrived, faux-folksy, forced ideas of patriotism and uniformed service and political commitments that, let’s face it, are in high demand at outlets like Fox News — and CNN, and MSNBC, and everyone else in the mainstream media.

So here’s another reminder for everyone that there is no one way to be a veteran. But veteran or no, there are lots of ways to be full of garbage where your soul should be.