Though war dogs served with distinction in World War I, and in countless campaigns and conflicts before that — delivering... 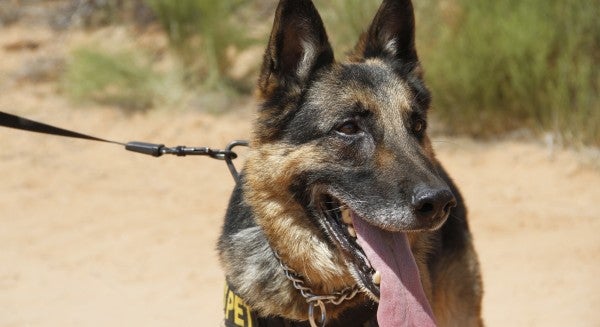 Though war dogs served with distinction in World War I, and in countless campaigns and conflicts before that — delivering messages, comforting frontline troops, and biting enemy soldiers on the ass — on March 13, 1942 the U.S. Army began training dogs to serve in the newly created War Dog Program, referred to as the K-9 Corps. The War Dog Program marked the beginning of modern military working dogs as we know them.

After the United States entered World War II on Dec. 8, 1941, the American Kennel Association and a group calling itself Dogs for Defense, encouraged dog owners back home to donate healthy canines to the Quartermaster Corps of the U.S. Army for training, notes History. Training the new war dogs began in earnest in March 1942, and by the fall, the Army Quartermaster Corps was given the task of providing war dogs to the Navy, Marine Corps, and Coast Guard as well.

Though the K-9 Corps initially accepted some 30 breeds of dogs, that list was soon whittled down to seven, many of which are still used today: German Shepherds, Belgian sheepdogs, Doberman Pinschers, collies, Siberian Huskies, Malamutes and Eskimo dogs.

Just like their uniformed handlers, the dogs went through their own rigorous basic training, which induced basic obedience training, before going off to a four-legged of MOS-school, with specialized training for messenger, mine-detection, sentry, and scout dogs.

Among the ranks of WWII war dogs, a German Shepherd and scout dog named Chips even earned distinction under fire, after he broke away from his handlers and attacked an enemy machine gun nest in Italy. Chips was awarded the Distinguished Service Cross, Silver Star, and Purple Heart — though the Army later rescinded the awards, due to a policy preventing the official commendation of animals.