A bomb-sniffing U.S. Marine Corps German shepherd who survived an IED blast while on patrol in Afghanistan was awarded the world’s... 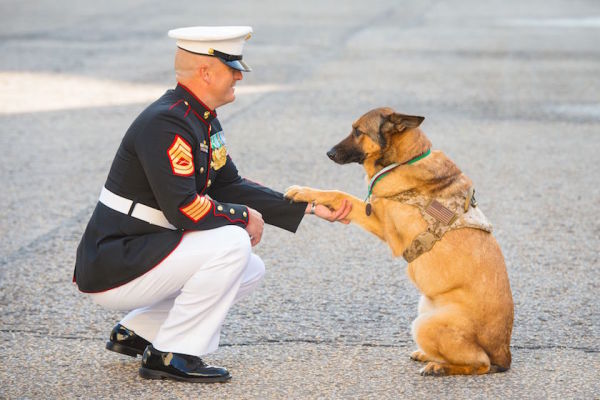 A bomb-sniffing U.S. Marine Corps German shepherd who survived an IED blast while on patrol in Afghanistan was awarded the world’s highest honor for service dogs on April 5.

The 12-year-old canine, named Lucca, joins a small pantheon of war animals who’ve received the prestigious People’s Dispensary for Sick Animals Dicken Medal, which has been awarded to dozens of dogs, messenger pigeons, three horses, and a cat since it was introduced in 1943. She is the first U.S. Marine Corps dog to receive the medal, considered the world’s top military honor for non-humans.

“Lucca's conspicuous gallantry and devotion to duty makes her a hugely deserving recipient of the PDSA Dickin Medal,” Jan McLoughlin, director general of the PDSA, said during a special ceremony at the Wellington Barracks in London. “Her ability and determination to seek out arms and explosives preserved human life amid some of the world's fiercest military conflicts.”

A veteran of Iraq and Afghanistan, Lucca completed over 400 missions with American troops over the course of a six-year career. No American casualties were sustained on any of the patrols she was on.

Life on the line ended for Lucca when she was struck by a roadside bomb during a routine patrol in Afghanistan’s restive Helmand province in March 2012.

“The explosion was huge and I immediately feared the worst for Lucca,” Cpl. Juan Rodriguez, who was Lucca’s handler when she was injured, told The Telegraph. “I ran to her and saw her struggling to get up. I picked her up and ran to the shelter of a nearby tree line, applied a tourniquet to her injured leg, and called the medics to collect us.”

Lucca lost her left front leg and suffered burns to her chest as a result of the blast, but recovered quickly after a life-saving surgery.

“Through all of her treatment, and despite the pain she was in, her temperament never changed,” Rodriguez said. “Her fighting spirit was plain to see and I was so proud of how quickly she recovered.”

Lucca is now in the care of her original handler, Gunnery Sgt. Christopher Willingham, who served two tours with Lucca in Iraq before placing her in Rodriguez’s care.