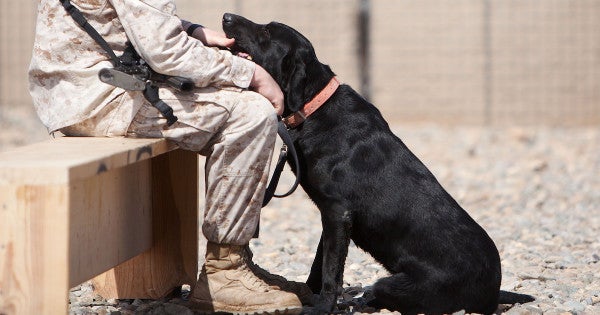 In 2012, Lance Cpl. Abraham Tarwoe and his dog, Sgt. Yeager, were patrolling the Marjah district of Iraq.

A Marine had been injured by an IED, an improvised explosive device, so the pair were looking for other bombs in the area.

Suddenly, Tarwoe stepped on a buried IED, and it exploded, killing him.

Yeager suffered shrapnel wounds that took months to recover from and cost him part of his right ear.

Ninety-two military working dogs died in Iraq and Afghanistan from 2001-13, according to a study in Military Medicine. Roughly one in four died from explosions, the second leading cause of death after gunshot wounds.

Yeager was awarded a Purple Heart for his injuries after serving three combat tours and over 100 detection patrols.

Now, the 12-year-old Labrador retriever is going to Hollywood, where he will be honored as the nation's top military dog and will compete for the title of American Hero Dog.

Tarwoe was born in Liberia and fled the country's civil war at age 12 to the United States. He went to high school in New Jersey.

His citizenship was being processed when he was killed.

He was buried in Liberia, where many of his family members still live. He was 26 years old.

Yeager began serving alongside Tarwoe, a mortarman, in 2011 for the Weapons Company of the 2nd Battalion, 9th Marine Regiment.

According to American Humane, fellow Marines described the bond between the handler and his dog as “unbreakable.”

On the day of Tarwoe's memorial service, Yeager approached the wooden cross and lay in front of it, unprompted, until after everyone had left.

Yeager, an improvised explosive device detection dog, lies in front of a battlefield cross during a moment of silence in honor of Lance Cpl. Abraham Tarwoe, a dog handler and mortarman who served with Weapons Company, 2nd Bn., 9th Marines, during a memorial service on April 22, 2012

After recovering from his injuries, Yeager was adopted by Caroline Zuendel's family in Cary because Tarwoe's widow couldn't take care of both him and their infant son.

Zuendel was married to a veteran, and Yeager went with the family to all of his hospital visits. They quickly realized how mild-mannered and sweet he is.

When visitors enter the Zuendel house, Yeager runs downstairs from his favorite spot in the upstairs bathroom and greets them by turning sideways and waiting to be rubbed. He's a favorite in the community.

“Everyone always asks if he can be their dog,” Zuendel said.

Although he's losing his hearing and has slowed down, Yeager still loves playing with groups of kids.

For Caroline's children, Mariah, Mackenzie and Simon, he has been a great pet and a source of stability when times get tough.

“It's hard to say since he can't speak,” she said. “But he has dreams that seem heartbreaking at times, and I will wake him up and reassure him.”

Yeager — Sgt is his actual military title — is the 2019 Military Dog of the Year and one of seven dogs receiving 2019 American Humane Hero Dog awards. They are now finalists for the grand prize: American Hero Dog.

He will be flown to Hollywood for an awards gala Oct. 5 at the Beverly Hilton. The show will broadcast Oct. 23 as a two-hour special on the Hallmark Channel.

Yeager is also going to Washington, D.C. in September to receive the Medal of Courage from American Humane, a national nonprofit founded in 1877.