"Unless there is a groundswell of public indignation against this effort, it is very likely to happen within the next year." 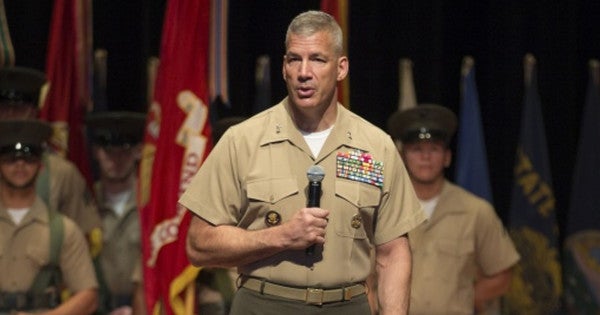 The two-star Marine general who oversees the training of female recruits at its Parris Island, South Carolina boot camp once suggested that integrating women into ground combat roles would ultimately lead to the destruction of the Marine Corps.

Sent amid a fierce debate over whether the Pentagon should lift its ban on allowing women to serve in ground combat units, the email from Mullen — then a colonel in charge of Marine Corps Tactics and Operations Group — asked recipients to circulate “as widely as possible” a blog post titled “Destroying The Marine Corps–Women In Combat” from a retired colonel who suggested that integration would be “a gargantuan mistake.”

“There is a renewed press for putting women in the infantry and it has nothing to do with military efficiency or the requirements of national security,” Mullen wrote in the April 2012 email. “Unless there is a groundswell of public indignation against this effort, it is very likely to happen within the next year.”

Both the blog post and Mullen’s email directed readers to watch a video of the 1991 congressional testimony of Gen. Robert H. Barrow, a hero of World War II, Korea, and Vietnam who led the Corps during the early 1980s. Reflecting back on his infantry combat experience, Barrow argued to lawmakers that female integration into combat fields would “destroy the Marine Corps, simple as that, something no enemy has been able to do in over 200 years.”

“It is very compelling,” Mullen wrote of Barrow’s testimony in the email, adding: “Unfortunately, even if we had leaders today with the credibility of Gen. Barrows (which we likely do), we do not have Senators of the quality of [John] Warner and [John] Glenn who would listen to them.”

“I ask that if you really care about this issue, please circulate the link below as widely as possible, but please do not associate it with me,” Mullen added. “Given my recent selection [to brigadier general]” — which had not yet been confirmed by the Senate — “I do not need any extra attention at this time.”

“Our military leaders are fighting this as best they can, but the push is coming from higher and it treats all facts contrary to their point of view as irrelevant,” he wrote. “This is entirely political.”

Mullen's behind-the-scenes lobbying effort ultimately failed. Defense Secretary Leon Panetta lifted the ban in Jan. 2013 amid a federal lawsuit charging that the restriction on women serving in certain roles amounted to discrimination, ordering the services to conduct reviews of physical requirements for combat jobs and, if deemed necessary, ask for exceptions by Jan. 2016.

In response to questions from Task & Purpose on whether his views had evolved in the years since, Mullen said his earlier opinions became “irrelevant” after the decision on integration was made.

“That email is from before a decision was made on this topic, so discussion about it was allowable,” Mullen wrote in an email to Task & Purpose on Thursday. “Once the decision was made, my opinion became irrelevant. My choices were then to get out, which I obviously did not do, or figure out how to make it work and keep the Marine Corps ready to fight. That is all that matters now. That and the fact that women are serving in combat roles and are are doing well.”

It's unclear whether other Corps leaders share Mullen's earlier views, though one widely-shared article from a female Marine captain in Sep. 2014 helped bolster his arguments. “I am a female Marine officer and I do not believe women should serve in the infantry,” then-Capt. Lauren Serrano wrote in the Marine Corps Gazette. A rebuttal to Serrano appeared on those same pages a few months later.

An exhaustive study of the issue commissioned by the Marine Corps in 2015 found that negative impacts on unit cohesion after integration improved over time, and leadership was the key to success. “Senior leaders are uniquely positioned to implement and enforce legal and policy changes needed to support integration,” the study's authors wrote. “Leaders also set the command climate and enforce good order and discipline to prevent issues of misconduct that can have negative impacts on cohesion.”

The Marine Corps was the only military service to ask for an exception to the lifting of the combat exclusion policy. In 2015, the service touted a separate, internal study to argue to Pentagon leaders women were unfit for roles in the Corps' infantry and other ground combat fields. That request was denied.

Since then, nearly 300 women have completed training to earn military job specialties that were previously unattainable, including 62 combat engineers, 31 infantry riflemen, and 28 artillery cannoneers, a Marine official told Task & Purpose earlier this week.

Among them are Lance Cpl. Alexa Barth, the first female Marine to finish the Corps’ basic reconnaissance course in Nov. 2019, a grueling training regimen that some 60% of Marines fail, and Lt. Marina Hierl, who became the first woman to lead an infantry platoon in 2018.

“She’s one of us,” said Lance Cpl. Kai Segura of Hierl, in an interview with The New York Times.

Also under Mullen's purview are the Corps' two recruit depots in San Diego, California and Parris Island, S.C. At the latter, the only boot camp currently equipped to train female recruits, male and female recruits train in separate platoons, though some lawmakers are calling for that to change. Since 1994, every other military branch has conducted coed basic training.

Female recruits at Parris Island typically train separately from men with 4th Recruit Training Battalion, though the service included one female platoon among a company of male recruits with the 3rd Battalion in early 2019. (The Corps repeated this integrated company model eight more times in fiscal year 2020, a Parris Island spokesman said.)

In Nov. 2019, Mullen signaled that he was open to ending gender-based segregation at the Corps' recruit depots in an interview with Military.com, saying he had commissioned an independent study of the matter to assess the potential impacts of the change.

The following month, Rep. Jackie Speier (D-Calif.) inserted a provision in the National Defense Authorization Act, reading: “Training at the Marine Corps Recruit Depot, Parris Island, South Carolina, may not be segregated based on gender.”

Despite his earlier opposition, Mullen told Task & Purpose in November that allowing women into ground combat roles was a “good thing.”

“What I personally believe is that every Marine should have the opportunity to join any [military occupational specialty] they want to join, as long as they are willing and able to meet the standards for the MOS and continue to do so for the entire time they are wearing the uniform,” Mullen told Task & Purpose in an email. “They now have the opportunity to do so and that is a good thing.”

“The realities are that most women do not want to be in the infantry, and that pushing too hard on this issue could result (and has resulted) in our young Marines getting injured, some of them permanently,” he added. “These realities are beside the point for those with an agenda to push.”

As for recruit training, Mullen said, all that mattered was setting up young Marines for success later in their careers.

“If we can commission an independent study that will genuinely do what we are asking – conduct an objective and unbiased look at the approach we take compared to the other services, we believe it will show we have it right, but … if it indicates otherwise, we have to take another hard look,” he wrote.

When reached for comment by Task & Purpose, Mullen questioned the decision to publish the email because, he said, the topic was now a “dead issue.” Task & Purpose disagrees, as debate over the topic continues: In 2018, then-Defense Secretary James Mattis asserted that “the jury is out” on whether women could succeed in combat jobs, and in 2019, the Wall Street Journal published an op-ed arguing that a future defense secretary should end integration efforts.

Ultimately, the private views of a senior Marine leader are newsworthy and offer important historical context for the American public, regardless of whether they support or oppose the 2013 policy change.

“As it is, I do not really have a dog in this fight anymore as I will be retiring at the end of the summer,” Mullen said Thursday.