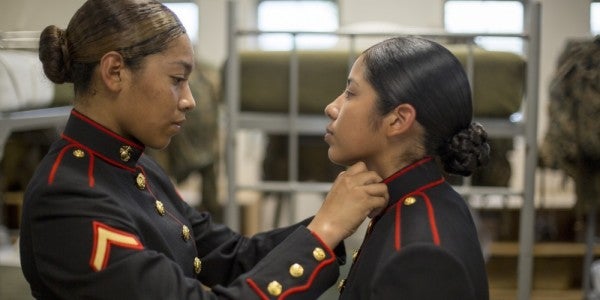 “With this change, all Marines will have the uniform of the Corps, and there will be no doubts that they are U.S. Marines in the dress blue uniform,” Louis Curcio, of Marine Corps Systems Command, said in a Tuesday news release.

The Marines with November Company, 4th Recruit Training Battalion wore the new coats at Parris Island, South Carolina, during their Nov. 16 graduation ceremony, according to the release. Another company at Parris Island was the first to actually receive the coats in August but the coats are not worn during summer graduations.

The new dress coat looks similar to the uniform that men wear but it is designed to be more form-fitting for female Marines. It includes a white belt and a standing collar.

“We knew what the male uniform looked like, and we wanted to develop a female uniform that was similar to the males but met the unique design challenges of the female shape,” Mary Boyt, of the Marine Corps Uniform Board, said in a separate news release. “So, we didn’t want to just throw a male coat on them and say this is it.”

Enlisted Marines will receive enough money from their clothing allowances over the next four years to pay for the uniform, which will become mandatory in fiscal 2022, Corps officials said.

The design for the blue dress coat is similar to what female Marines wore when they joined the Corps in the World War II-era, said Staff Sgt. Kara Sykes, a drill instructor for the 4th Recruit Training Battalion and the unit’s historian.

“If you look back at history, when females first came into the Marine Corps, we had the high coats with the high neck collars and then we changed over the years to a different coat,” Sykes said in the news release.

“The coat we have now is similar to when we first started,” she added. “We’re bringing it back. It’s a good time for us to actually wear the coat … to see the history, to see how far we’ve come and to come back to history.”