Fleeing Shoplifter Surrenders To Marine Vet In His Dress Blues

When a shoplifter decided to snag some swag from a Walmart in Plano, Texas, on Dec. 9, he committed a... 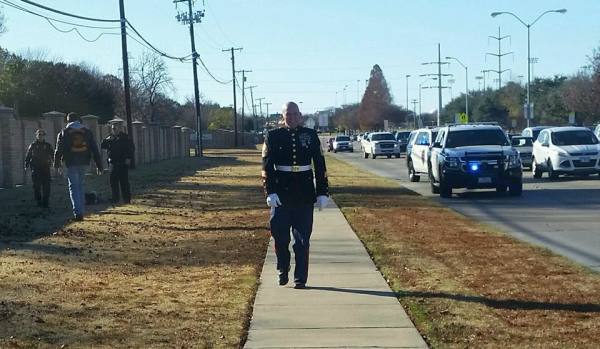 When a shoplifter decided to snag some swag from a Walmart in Plano, Texas, on Dec. 9, he committed a critical intelligence error: The local Marine Corps League was hosting a Toys for Tots donation drive in front of the business.

And you know what that means: There were Marines on hand — including at least one former gunnery sergeant who’s clearly kept up with daily PT since getting out.

When Marine veteran Nathan Hanson saw fellow volunteers chasing a man out of the store last Saturday, his first thought was that the thief had stolen from Toys for Tots, an annual-Corps sponsored campaign to collect new and unwrapped Christmas gifts for children in the community, according to KXAS-TV, a Fort Worth, Texas-based NBC news station.

“I just saw some of our other volunteers trying to grab this guy,” Hanson, who served in the Marines from 1996 to 2010, told Task & Purpose via Facebook messenger. “So I assumed maybe a volunteer had set their Toys For Tots collection bucket down and maybe he had grab cash out of it.

Ho-ho-ho nope, not on my watch, Hanson must have thought as he took off in pursuit — never mind that he was decked out in his dress blues, down to the slippery soles of his Corfam shoes.

Hanson pursued the alleged shoplifter, 25-year-old William Horn, through traffic and across an intersection. But those leather kicks aren’t made for running — a fact a trio of devil dogs discovered in 2015 — and while pounding the pavement, Hanson slipped.

“I fell on my face when I got over there,” Hanson told NBC. “And then I got up and I yelled at him, 'You're not getting away, I'm going to catch you!'”

With a patrol car headed in Horn’s direction, and Hanson closing in along with a fellow Marine vet, Alisia Dunning, the thief slowed his roll. Who knows: Maybe he was familiar with other stories about Marines who pursued would-be thieves. Or he was just weighed down by the $91 in random electronics equipment he swiped from Walmart.

“He realized he couldn't get away, and at that point he slowed down and stopped and said, 'I give up, I'm sorry,'” Hanson told NBC. “He got down, and I just waited there until the Plano Police Department came over.”

In the pursuit, Hanson tore his uniform and lost his cover… but a Facebook fundraiser launched to replace his uniform items raised more than $500 in just a few days. Hanson, embarrassed by the attention, told Task & Purpose that the extra funds would be donated back to Toys for Tots.

“Once a Marine, always a Marine,” Dunning told NBC. “It's our duty to take care of those that are in need. Even though Walmart is not necessarily a person, no one deserves to be stolen from.”

Update: The gunnery sergeant has weighed in on T&P;'s Facebook page with some interesting new details.