One man's choice of lawn decorations is causing a stir in an east Greeley neighborhood, but he said he won't... 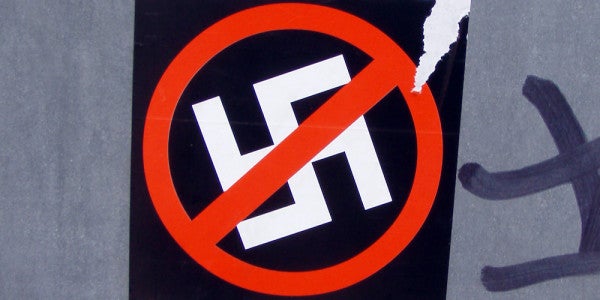 One man's choice of lawn decorations is causing a stir in an east Greeley neighborhood, but he said he won't take down his cardboard “Fuck Nazis” sign anytime soon.

A neighbor in the 2400 block of Balsam Avenue in eat Greeley has called the police and reached out to The Tribune about the sign. Although the neighbor, who asked to remain anonymous, said he's never had any problem with Nazis, he said he was most concerned about the vulgar language on the sign.

Kids pass by the house before and after school at Bella Romero Academy of Applied Technology, the neighbor said.

It's not news that Nazis elicit strong feelings. But this sign is news in an east Greeley neighborhood. https://t.co/Ruy6MdptQ8 pic.twitter.com/YaUIlxJV8f

Joseph Ruibal is a Vietnam Veteran, serving in the 173rd Army Airborne Brigade Combat Team. Ruibal, 69, said his father served in World War II and killed his share of Nazis.

Ruibal was recently in the news after using an ax to threaten a woman and her son because he said the woman's license plate was expired. Greeley Police arrested Ruibal and booked him into the Weld County Jail on suspicion of two counts of menacing and two counts of harassment.

Even though his son, Preston Ruibal, created the sign, Ruibal said he stands behind it.

“If (people) want to wear the Nazi emblem, that's fine,” Ruibal said. “It's just like the confederates; they're both loser flags.”

Preston is a Greeley Central High School student and was hanging out in front of the Ruibal home Tuesday. He said he was inspired to create the sign after the protests in Charleston, South Carolina, at which Nazis and white supremacists clashed with counter-protestors. One counter-protester was killed when a white supremacist deliberately drove his car into a crowd of people.

Joseph and Preston said they've never had a neighbor approach them with a negative attitude about the sign.

So look what showed up at our office today. No card. No explanation. It’s the same sign from today’s story: https://t.co/jIbJWa43f6 pic.twitter.com/YLpibwrBKT

At least one neighbor begs to differ. But, despite calls to the police, the sign won't come down. Greeley Police Chief Jerry Garner said it's a free speech issue. And because there is no homeowners association in the area, Ruibal's sign will stay until he's ready to take it down.

The small, cardboard sign sits just below a tattered United States flag Ruibal has had since Sept. 11, 2001.