A firefighter and former Marine by the name of Daniel Gaskey, 30, took down an armed robber with his bare... 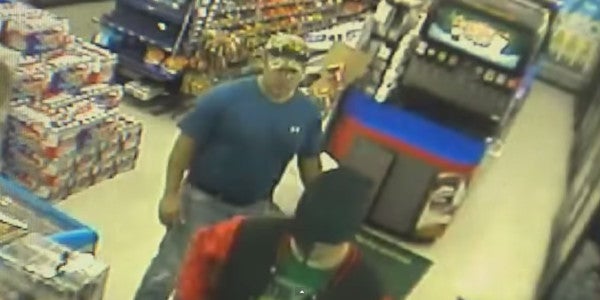 A firefighter and former Marine by the name of Daniel Gaskey, 30, took down an armed robber with his bare hands in a convenience store on June 26, and it was all caught on tape. The attempted robbery took place in the early morning at the Exxon Oasis Food Store in Midlothian, Texas.

Recently released surveillance video shows Gaskey, who works at the fire department in Mansfield, Texas, waiting in line when a man comes into the store wearing a black mask.

Gaskey told Task & Purpose that he often stops at the gas station, and didn’t think anything was out of the ordinary until the man — who was later identified as 19-year-old Dylan Bearden according to NBC News — put his hand on Gaskey’s shoulder and pushed him aside.

“My initial thought is ‘Why are you touching me? Why are you pushing me out of the way?’” recounted Gaskey, who served as an intelligence Marine from 2003–2011, and deployed to Iraq for nine months in 2005 with 2nd Battalion, 2nd Marine Regiment.

“I took a step away to see what’s going on,” continued Gaskey, who said that Bearden then brandished a fix-blade knife and told the cashier: “This will go quick and easy, I’m just here for the money.”

This is when he decided to make his move. According to Gaskey, Bearden had his back to him, and the clerk was far enough away from the knife that a stray swing wouldn’t hit her.

“He was completely ignoring me, so after that it was an instinctive reaction,” Gaskey said.

It all happens in a matter of seconds, and in the video you see Gaskey size Bearden up before springing into action. The former Marine throws his arm around the robber’s neck and has him on the ground in a matter of seconds. Gaskey then pins him down and removes the knife from his possession. Gaskey said he held Bearden on the floor for about five minutes until police arrived.

“I’ve always had a protective nature. I’ve always been someone who was willing to stand up for what’s right, and that’s what took me into the Marine Corps,” Gaskey said, when asked what led him to not one, but two careers in public service. “Coming out of the Marine Corps, I didn’t see myself doing an for the rest of my life, and I knew I’d either be a cop or a firefighter.”