Pitching an idea similar to the one he used in 2007 during the Iraq surge, retired Army general and former... 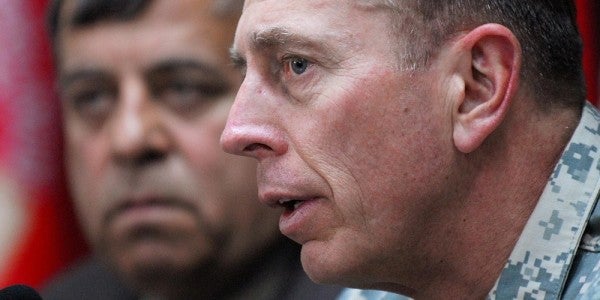 Pitching an idea similar to the one he used in 2007 during the Iraq surge, retired Army general and former CIA Director David Petraeus has quietly proposed a plan to pit moderate members of al Qaeda’s Syrian branch against the Islamic State, the Daily Beast reports.

Those familiar with Petraeus’ thinking told the Daily Beast that he recommends using less extreme al Nusra fighters, who are battling the Islamic State, but who joined with the goal of overthrowing Syrian President Bashar al Assad.

“As prospects for Assad dim, opposition groups not already aligned with the U.S. or our partners will face a choice,” a U.S. intelligence official told The Daily Beast. “Groups that try to cater to both hardliners and the West could find themselves without any friends, having distanced themselves from groups like al Qaeda but still viewed as extremists by the moderate opposition and their supporters.”

The plan also faces legal and security barriers, due to the Obama administration having declared al Nusra a foreign terrorist organization in 2012.