The Incredible Story Of The Marine Who Rode Lightning 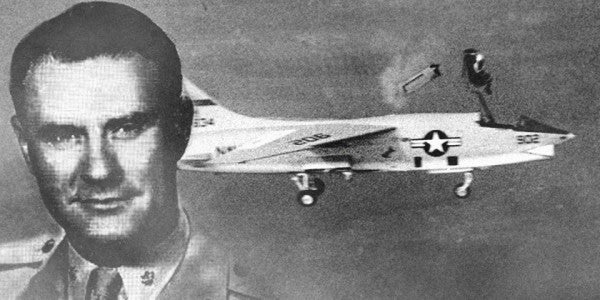 When Marine Lt. Col. William Henry Rankin ejected at 40,000 feet after his F-8 Crusader malfunctioned, things didn’t seem like they could get much worse. Then he fell through a raging thunderstorm.

On July 26, 1959, Rankin was on a high-altitude flight along the Carolina Coast with his wingman, Navy Lt. Herbert Nolan. The pair of F-8 Crusaders — called “candy stripers” for their distinctive silver-grey and orange coloring — cruised along at an altitude of 47,000 feet.

It was a smooth flight. The only potential problem was the storm beneath them, one they would have to fly through before landing at the Marine air station in Beaufort, South Carolina.

They were nine miles up and minutes away from the air station when things took a turn.

Rankin’s engine quit with a jolt. He tried in vain to keep his aircraft from nosing downward and gaining speed, but it didn’t work. Instincts honed over more than 100 combat missions during World War II and the Korean War told Rankin what he had to do.

He radioed Nolan: “Power failure. May have to eject.”

It was going to be rough. Rankin pulled the overhead handles to trigger the ejection sequence, and moments later he was in the air as his plane descended into the clouds below.

Rankin was now free falling from 40,000 feet. The air was -65 degrees fahrenheit and the effect of the altitude led to severe decompression.

“I had a terrible feeling like my abdomen was bloated twice its size. My nose seemed to explode. For 30 seconds I thought the decompression had me,” Rankin told Time Magazine in an August 1959 article about the ordeal. “It was a shocking cold all over. My ankles and wrists began to burn as though somebody had put dry ice on my skin. My left hand went numb. I had lost that glove when I went out.”

Rankin’s parachute was set to deploy automatically at 10,000 feet and though he wanted to open it earlier, he knew he couldn’t. The combination of freezing temperatures, decompression, and lack of oxygen would likely kill him before he reached the ground.

Falling through the air, Rankin plunged into the storm — the same one he was soaring over just minutes earlier.

Suddenly, he felt a jolt as his chute opened prematurely. He was now stuck in the middle of a thunderstorm. The muscular 39-year-old fighter pilot and weightlifter was tossed about like a ragdoll as lightning crackled and snapped around him.

“I'd see lightning. Boy, do I remember that lightning,” Rankin told Time Magazine. “I never exactly heard the thunder; I felt it. I remember falling through hail, and that worried me; I was afraid the hail would tear the chute. Sometimes I was falling through heavy water — I'd take a breath and breathe in a mouthful of water. Sometimes I had the sensation I was looping the chute. I was blown up and down as much as 6,000 feet at a time. It went on for a long time, like being on a very fast elevator, with strong blasts of compressed air hitting you.”

Again and again, Rankin was thrown around by the wind and came dangerously close to being tangled in his chute several times. He was bleeding from his eyes, ears, nose, and mouth from the decompression. At one point, he became nauseous and threw up.

Finally, after what must have felt like ages, Rankin descended through the storm toward safety. All he had to do now was stick the landing.

Swept by fast winds, Rankin’s chute became tangled in branches and he slammed headfirst into the trunk of a tree. Staggering to his feet, he was able to get his bearings and after searching for a few minutes found a back country road. He waved down a passing car and was taken to a nearby store where an ambulance was called.

Amazingly, Rankin’s injuries were minor considering what he went through. Rankin went on to write a book about the experience. In 1964, he retired from the Marine Corps and in 2009, passed away in Oakdale, Pennsylvania, but his legacy endures.

Lt. Col. William Rankin fell through a nightmarish storm and rode the lightning to safety.