The Incredible Story Of The Men Who Survived A Torpedo Attack, Sinking Ship, Sharks, And 5 Days Lost At Sea

Seventy years ago, the worst naval disaster in U.S. history and worst shark attack ever was overshadowed by the dropping... 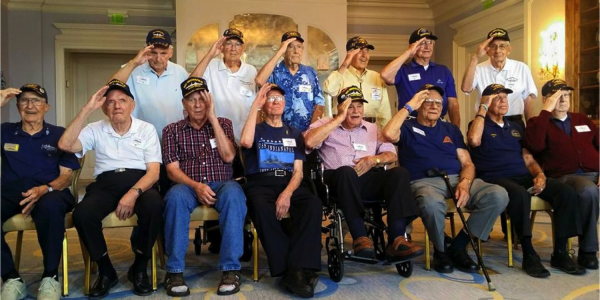 Seventy years ago, the worst naval disaster in U.S. history and worst shark attack ever was overshadowed by the dropping of the world’s first atomic bomb over the city of Hiroshima.

The connection between the two epic events was not immediately known, not even to the ship’s crew.

Just past midnight on July 30, 1945, the USS Indianapolis, a Portland-class heavy cruiser, was torpedoed by a Japanese submarine, sinking it in approximately 12 minutes.

Ensign Harlan M. Twible, after the sinking of the Indianapolis.Photo courtesy of Harlan Twible

The Indianapolis was en route to the Leyte Gulf in the Philippines, returning from Tinian Island where it delivered its top secret cargo; the uranium and components to the atomic bomb codenamed, “Little Boy.”

Of the 1,196 men on board (some accounts cite 1,197), roughly 300 perished with the ship. Approximately 900 went into the murky waters. For the next four days, they would struggle against insurmountable odds; fighting off vicious shark attacks, dehydration, hallucinations and starvation. When finally rescued on Aug. 2, only 317 men were still alive.

“I never had any doubt we would survive,” said 94-year-old Harlan Twible in an interview from his home in Sarasota, Florida. “I was too busy. I was responsible for 325 men.”

The then 23-year-old ensign was just getting off watch when the first torpedo struck and quickly began sinking. “No one was taking charge so I hollered to the men to abandoned ship,” said Twible, then a gunnery officer. He yelled at everyone to swim away to avoid getting sucked under. “It was pure chaos; everyone was scared to death. The men grabbed on to anyone they thought might help,” he said, and told everyone to tie their life nets together.

“No one ever instructed us what we should do if and when we got sunk,” explained Twible of his training at the Naval Academy. “We were taught our main ambitions were to keep fighting.”

Yet he knew enough to tell the men not to drink the saltwater and to stay together. “The people who broke away from the group would get attacked by the sharks.”

Twenty-two-year-old Navy Seaman 1st Class Lyle Umenhoffer had also just been relieved of his watch and was laying down when the torpedoes hit.

“By the time I heard anyone shout to abandon ship I was sliding off portside as the ship rolled to the starboard side,” said the 92-year-old widow in an interview. “That’s when I hit a hatch and tumbled into the water.”

Umenhoffer just returned to his home in San Gabriel, California, from the four-day annual reunion of survivors in Indianapolis. The reunion took place from July 23–26.

Reflecting on that fateful night when the Indianapolis sunk, Umenhoffer said he was all alone in the dark, oily water without a life jacket, and spent the next five hours swimming and trying to stay afloat.

At dawn, Umenhoffer found a group of about 30 men. “They gave me a 20mm ammo shell can to float on. I eventually got a life belt,” he recalled. “We tied our life belts together and made a circle putting the wounded men in the middle. Many were burned. If they didn’t look too good you’d go over and if they didn’t respond, you lift his eyelid and touch his eyeball. If he didn’t blink you knew he was dead.”

Survivor Lyle Umenhoffer arriving at the luncheon for the 70th reunion of USS Indianapolis survivors.Photo by Kim Roller

They’d let the dead go and the sharks would come, which began circling the first day.

“There were thousands all over the place — sharks and barracudas,” recalled Umenhoffer. They wouldn’t attack you if you were in a group. It was the men who began hallucinating from drinking salt water that would swim away thinking they saw a ship or a hula girl who were attacked by sharks.

This went on for four more days and nights. “I stayed awake for five days,” added Twible.

Both men credit their survival to their strong will and unwavering faith in God. “When anyone would get irrational I would call the men to prayer,” said Twible.

He also knew how to protect them from the blazing, scorching sun. “We’re in the middle of the Pacific with 120 degrees sun and the water was covered with oil from the ship,” Twible explained.

He put out the order to smear oil all over their bodies. “By the grace of God those that did survived.” The fair-skinned red head from Gilbertville, Massachusetts, didn’t get a speck of sunburn.

On the fourth day, the floating men were accidentally discovered by Lt. Wilbur C. Gwinn, piloting his PV-1 Ventura Bomber on routine anti-submarine patrol. By then, Twible’s group had drifted 58 miles from where the ship sank. Only three men were left of Umenhoffer’s group. They were picked up by Lt. Adrian Mark’s seaplane on the third run.

“There were over 50 men on the plane,” remembered Umenhoffer. “Me and a couple other guys were instructed to climb out onto the wings to make more room.” They were flown to a hospital in Peleliu. It wasn’t until the next night when they were picked up by the USS Tranquility hospital ship that he realized his leg was torn up.

The news of the disaster did not immediately make headlines. Many believe the Navy purposely delayed an official announcement for two weeks so it would be overshadowed by the news of Japan’s unconditional surrender on Aug. 15. The remarkable story remained mostly unknown, relegated to a couple paragraphs on the inside pages away from the bold headlines declaring the end of the war.

Indianapolis' survivors en route to a hospital following their rescue, circa early August 1945.

It took a famous four-minute monologue in the 1975 summer blockbuster “Jaws” to bring long-deserved attention to millions of people who had never heard of the sinking of the USS Indy.

Twible said he feels the movie did an acceptable job, but no one from the crew was ever contacted. He added that nobody really wanted to talk about it at that time. “It was still fresh in our minds and you don’t want to relive things like that,” he said. Even Umenhoffer’s wife didn’t know about his ordeal at sea for 11 years.

“Jaws” was released just a few years after their skipper, Capt. Charles B. McVay III, committed suicide. The third-generation Navy man was court-martialed in December 1945 for “failure to follow a zigzag course, therefore hazarding his ship.” Many believe he was made a scapegoat by the Navy, which denied his requests for an escort, failed to warn him of enemy hostilities in the area, and didn’t notice the ship was missing.

“It was a railroad job,” said Umenhoffer.

In 1997, after watching “Jaws” with his dad, an 11-year-old named Hunter Scott, now a Naval Aviator in San Diego, embarked on a crusade to clear McVay's name. His efforts along with the testimony of several congressmen resulted in President Bill Clinton and Congress exonerating McVay in 2000.

At the Indianapolis reunion last week, 14 of the 31 remaining survivors attended the 70th anniversary commemoration and reunion. In attendance were the daughter and granddaughter of Mochitsura Hashimoto, the Japanese commander who ordered the sinking of the Indianapolis; rescuers Jonathon Johnson from the USS Doyle and Bill Fouts from the USS Ringness; and Hunter Scott.

Although dozens of books and a few television movies have been made about the fateful ship, after 70 years, the Indy is finally getting the Hollywood treatment with two upcoming films. “USS Indianapolis: Men of Courage,” starring Nicholas Cage as Captain McVay is currently filming in Mobile, Alabama. Another untitled movie, produced by Robert Downey Jr., is currently in development at Warner Brothers.

“USS Indianapolis: Men of Courage,” is tentatively scheduled for a 2016 release.