An Inside Look At The Islamic State’s Powerful Arsenal

For a force with no factories or arms facilities of its own, the sheer volume of military equipment in the... 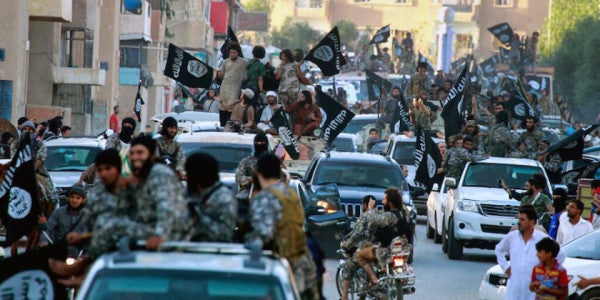 For a force with no factories or arms facilities of its own, the sheer volume of military equipment in the Islamic State’s possession is staggering, because it all had to be captured or stolen, according to Fox News. Even though the U.S. Central Command announced in January that airstrikes against the Islamic State destroyed 184 Humvees, 58 tanks, and 700 other vehicles, these losses don’t scratch the surface of the militant group's arsenal.

For example, last year Islamic State militants captured 2,300 Humvees from Iraqi security forces when the militant group took the city of Mosul. In May, the extremist group captured U.S.-built equipment, which included M1A1 tanks when militants took the town of Ramadi.

“Rocket-fired grenades and shoulder-launched missiles have long been available in black markets in the Middle East and Africa, but this higher-end stuff is coming from other sources,” Seth Jones, director of international security and defense policy center at the RAND Corp. told FoxNews.com. “This really shows that conventional weapons are a reason for concern.”