In just a few years, American soldiers might have the ability to see what’s inside a room before they ever... 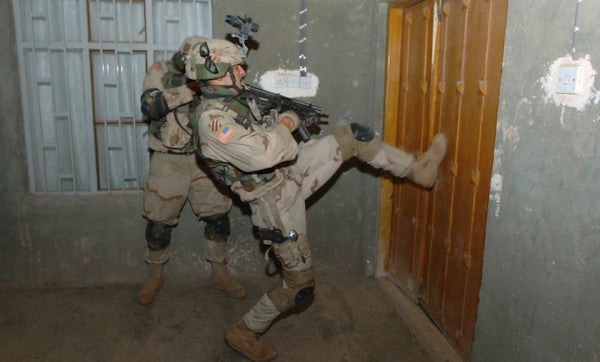 In just a few years, American soldiers might have the ability to see what’s inside a room before they ever breach it. And while it may not sound like much, that ability could transform the way combat operations are conducted in urban environments, where hidden enemies and explosives abound. More importantly: it could save countless American lives.

During an event at the Pentagon in May, DARPA showed off its newVirtualEye program, which allows its user to create an on-the-spot 3D image of a room. Rather than kicking in a door with a limited sense of who or what lies behind it — a dangerous scenario soldiers face all too often when clearing rooms —VirtualEye will allow them to virtually explore a live 3D rendering of a room or building from a remote location and pinpoint the exact locations of enemy personnel and booby traps within seconds.

Here’s how it works: VirtualEye takes images from multiple cameras and patches them together into one clear, cohesive map. These cameras can be attached to any type of small roving device, allowing them to explore and map every inch of a building or room. This allows users to take a virtual tour of the room, checking under furniture and behind doors for hidden assailants or threats. The program doesn’t require much hardware, either — only a tablet, some roving devices, and a few basic cameras.

Related: Meet the cute little robot out for terrorist blood >>

It’s not difficult to imagine how this technology could be applied effectively on the modern battlefield. Say a team of Special Forces soldiers is clearing a neighborhood in search of ISIS militants. The soldiers are almost positive they’ve identified the building the militants are hiding in, but don’t want to risk rushing through a booby-trapped doorway. With VirtualEye, they could toss a couple of camera-mounted roving devices through a window and start the room-mapping process from a relatively safe distance. In a matter of seconds, they could determine if anyone was hiding in the room and whether or not the door was rigged with explosives.

Once fielded, VirtualEye could provide an immediate upgrade for troops on the ground tasked with conducting combat operations in urban environments. And while the program still has plenty to prove before it works its way into the U.S. military’s arsenal, DARPA estimates this technology could be battlefield-ready in as little as two years. Those ISIS militants may want to start lacing up their running shoes now. Soon, hiding might not be an option.