A GoFundMe campaign has been launched to help the family of retired Marine Master Sgt. Rodney Buentello, a Marine Corps... 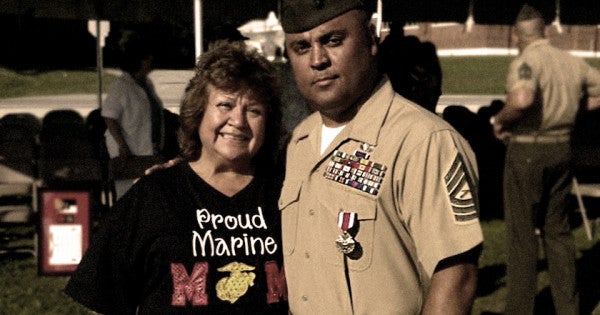 A GoFundMe campaign has been launched to help the family of retired Marine Master Sgt. Rodney Buentello, a Marine Corps veteran and Purple Heart recipient, who drowned after rescuing two teens, in Bandera City, Texas, on June 8.

According to Marine Corps Times, Buentello was in Bandera City Park, about an hour northwest of San Antonio, when two teenagers became caught in the undertow of the Medina River.

“A female attempted to walk across the dam (in violation of city ordinance) she was washed off and caught in the undertow,” reads a statement that was released on the Bandera Marshal’s Office Facebook page soon after the incident. “A male teenager went into the water and quickly became caught as well.”

Buentello, who was visiting the park with his family, dove into the rushing waters and managed to save the teens before being dragged underwater himself. He drowned before rescuers could reach him.

Related: The Airman Who Gave His Life To Warn Others Of Insider Attack »

Now, family, friends, and complete strangers are rallying on behalf of Buentello’s wife and three sons — ages eight, nine, and 20.

“He was our fellow classmate and our friend so we are raising money to help his wife cover unexpected costs and the immediate care of his young children, as Rodney was the primary breadwinner for the family,” reads a statement on the GoFundMe page.

The statement goes on to explain that Buentello had attended high school in the San Antonio area before joining the Marines and serving one tour in Afghanistan and three in Iraq.

Buentello had also served as a recruiter in San Antonio and as a training chief and class instructor for Headquarters and Headquarters Squadron in Iwakuni, Japan, according to Marine Corps Times.

The Bandera Marshal’s Office concluded its Facebook statement, which has gone viral, with the following epitaph: “Greater love hath no man, than to lay down his life for another. Semper Fidelis.”