If you join a foreign military as a volunteer to fight and kill members of a terrorist organization considered an... 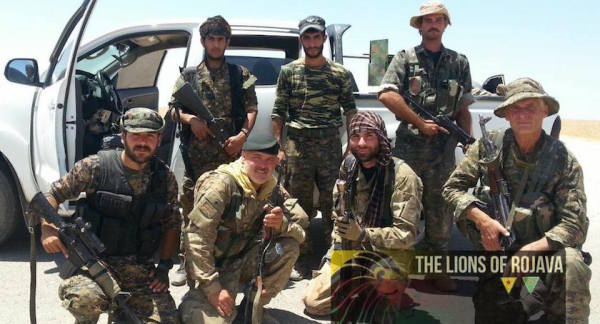 If you join a foreign military as a volunteer to fight and kill members of a terrorist organization considered an enemy of your native country, are you a criminal? That was the central question at hand in the case of a Dutch veteran who voluntarily joined a Kurdish militia in northern Syria and allegedly killed an ISIS militant in battle. And while the answer remains unclear, Dutch authorities have just announced that the man, Jitse Akse, 47, who was arrested in January, will not face criminal charges, Rudaw reports.

In early 2015, Akse joined the Kurdish People’s Protection Units, or YPG, the armed wing of the Democratic Union Party, which has been engaged in fierce combat with ISIS since the terrorist group swept through the region two years ago. Soon after returning to the Netherlands, Akse was arrested by Dutch authorities on suspicion of murder. Meanwhile, many of his fellow countrymen took to social media to hail him a hero, even going so far as to start an online petition against his arrest that garnered more than 50,000 signatures.

The YPG is one of a few armed Kurdish groups in Iraq and Syria that openly welcomes Westerners into their ranks. Dozens of British, American, European, and Australian volunteer fighters, the majority of them ex-military, have served with the YPG and other Kurdish military units since the war with ISIS began, according to an open-source investigation published on the website Bellingcat. Several volunteers have been killed in combat, including an American named Keith Broomfield, who died in June 2015 while serving with the YPG.

Related: This Norwegian Mercenary Is Instagramming His Fight Against ISIS»

Joining the ground fight against ISIS isn’t as difficult as most people might think. A Facebook page called The Lions of Rojava, which was created by an American foreign fighter who served with the YPG, has been used by the group to court Western volunteers and publicize their exploits on the battlefield since the fall of 2014. Additionally, several unofficial organizations based in Europe and the United States continue to recruit Westerners seeking to join the fight, working closely with the YPG and other Kurdish units to facilitate the journey to the battlefields of the Middle East.

On both sides of the Iraq-Syria border, Westerner volunteers have served in a variety of roles, from combatants, to military trainers, to English-speaking poster boys or girls for the units they volunteer with. Akse seems to have functioned primarily as a frontline soldier with the YPG and saw action. In an interview with a local Dutch newspaper, he admitted to killing a jihadist in battle, saying, “[By] killing a member of [ISIS] I have probably saved dozens of lives.” That interview, as well as additional claims Akse made on his personal Facebook page, came back to haunt him when he returned to the Netherlands.

“Dutch law — apart from in exceptional circumstances like self-defense — does not give citizens the right to use force and particularly not deadly force,” Dutch authorities said in a statement at the time of Akse’s arrest in January. “Killing an [ISIS] fighter therefore could mean being prosecuted for murder.”

Now, Akse no longer faces the risk of being jailed for what he may or may not have done in war-torn northern Syria. According to Rudaw, the public prosecutor decided to drop the charges after it was deemed impossible to sufficiently investigate the case given the “current climate” of the area where the alleged crime was committed.

“Public prosecutors have dismissed the case against JA, who was suspected of being involved in killing ISIS fighters in Syria,” a statement from the prosecutor’s office reads. “[There is] insufficient evidence to show that [Akse] was personally involved in committing homicide or attempted homicide.”

So far, none of the American volunteers who’ve squared off against ISIS on the battlefields of Iraq and Syria appear to have found themselves in legal trouble with U.S. authorities for doing so.