Shimoda served with the legendary 442nd Infantry Regiment in WWII, then lost his leg in combat in Korea. 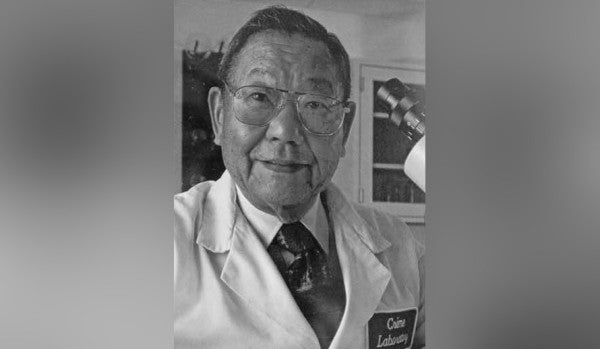 A 100-year-old Sebastopol man who died from injuries he suffered in a fire Monday at his family’s rural home was a World War II and Korean war veteran who learned criminal investigation in the Army and rose to director of the U.S. Army Crime Laboratories, then of a regional U.S. Postal Service crime lab.

Satoru C. “John” Shimoda was an internationally recognized expert in the field of questioned document examination. The forensics specialty involves lab testing to determine if a letter or other document is forged or contains, in the penmanship, ink, typewriter key strikes, fingerprints or other elements, any evidence that a crime was committed or that could be helpful to a criminal investigation.

In one of his most infamous cases, the handwriting expert examined letters ostensibly written by the Zodiac serial killer who terrorized the Bay Area and other parts of the state in the 1960s and ‘70s.

When the diligent, unassuming combat veteran retired from the postal service’s western region crime lab in San Bruno in 1999 — at age 80 — he was reported to be the oldest and longest-tenured employee of the U.S. Postal Service.

“He was a pretty amazing individual.”

He and his wife of 68 years, Hiroko “Betty” Shimoda, lived in Corte Madera for 46 years before moving to Sebastopol in 2013 to share the home of one of their two daughters and her family. Betty Shimoda died in March of 2017 at age 89.

Sonoma County authorities say that on Monday afternoon John Shimoda, who lost a leg to combat in Korea, was sitting in the garage of his family’s home on Mill Station Road. Somehow flames were ignited and he sustained critical burns.

The fire call was especially heartbreaking for members of the Graton Fire Department. Its firefighters were friends of Shimoda and his family, and just last August had him to the firehouse on Gravenstein Highway North for birthday dinner, with cake.

“We’d been to his house, he’d been to the fire station,” said Graton chief Bill Bullard. “He was a pretty amazing individual.”

Noting that the fire that took Shimoda’s life happened on Memorial Day, Bullard said he finds comfort in believing that his new friend is now with brothers at arms who died in war or as veterans.

A Nisei, or second-generation Japanese-American, Shimoda was born in Oregon on Sept. 13, 1919. He went into the U.S. Army during World War II and served with the highly decorated 442nd Infantry Regimental Combat Team, made up almost entirely of Nisei. In 2010, the unit was awarded the Congressional Gold Medal.

Shimoda made a career of the Army and became an officer. In the early 1950s, he learned document investigations techniques while serving in the Counter-Intelligence and Criminal Investigation Branch. He served also in Korea, later telling Graton volunteer firefighters that a combat injury there cost him one of his legs.

In 1960, he was appointed chief of the U.S. Army Crime Laboratories. Six years later, he retired from the military and took a position in San Bruno as assistant director of the western region crime labs of U.S. Postal Inspection Service.

He and his wife settled into a home in Marin County.

Betty Shimoda was the original proprietor of the Ocha-ya snack bar at San Francisco’s Japantown.

“His unassuming demeanor has been the consternation of many a defense attorney.”

A tribute by the American Society of Questioned Document Examiners observed that John Shimoda was frequently called to testify in court both in the U.S. and abroad on questions regarding the authenticity or authorship of documents entered as evidence.

“His unassuming demeanor has been the consternation of many a defense attorney,” read a 2007 tribute that accompanied the presentation to Shimoda of an ASQDE award of excellence.

In May 1978, San Francisco police detectives working to identify and arrest the Zodiac killer took Shimoda a letter that had been sent to the San Francisco Chronicle that appeared to be from the suspect.

Shimoda in time concluded, “I am of the opinion that the letter of April 24 was an attempt to duplicate Zodiac letters and is not authentic.”

The killer was never caught.

In addition to his decades of work with the Army and the Postal Service, Shimoda served as one of the first Diplomates of the American Board of Forensic Document Examiners and he was a life member of the California division of the International Association for Identification.

Just last year, his family attended a pancake breakfast at the Graton firehouse, located about three miles from home, and won a hosted dinner there at the station. The family chose to go the firehouse for his 100th birthday dinner.

“One of our firefighters prepared a meal of chicken parmesan, and we sat around the table together for hours talking and laughing, telling stories and enjoying his company,” reads a post on the volunteer fire company’s Facebook page. “It was a truly wonderful evening.”

The post then says of Shimoda, “While we only knew him briefly, he was one of the most colorful and enjoyable guests we ever had at Graton Fire Department. He will be missed by many.”

Shimoda is survived by his daughters, Carol Hebel of Sebastopol and Susan Tamai of San Francisco, four grandchildren and several great-grandchildren.