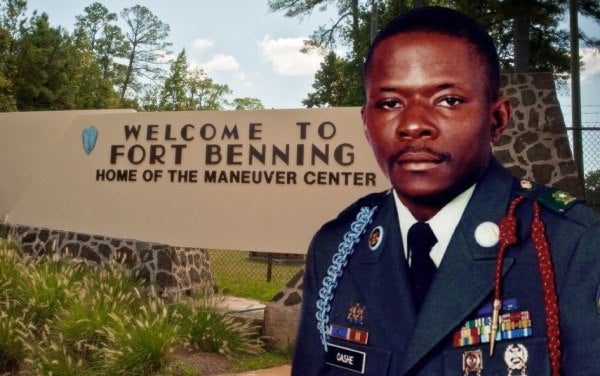 As protests sweep the nation after the murder of George Floyd, an official Army spokesperson revealed that Army Secretary Ryan McCarthy is open to the idea of renaming the service’s ten installations currently named after Confederate leaders. However, on June 10, President Donald Trump came out against the idea, calling the current base names “Great American Heritage.”

“It has been suggested that we should rename as many as 10 of our Legendary Military Bases, such as Fort Bragg in North Carolina, Fort Hood in Texas, Fort Benning in Georgia, etc. These Monumental and very Powerful Bases have become part of a Great American Heritage, and a…history of Winning, Victory, and Freedom,” Trump tweeted. ” The United States of America trained and deployed our HEROES on these Hallowed Grounds, and won two World Wars. Therefore, my Administration will not even consider the renaming of these Magnificent and Fabled Military Installations…Our History as the Greatest Nation in the World will not be tampered with. Respect our Military!”

I implore you, Mr. President: rename Fort Benning for Sergeant 1st Class Alwyn Cashe, an African American soldier killed in Iraq. Stop celebrating a rabid secessionist and large slaveholder who killed American soldiers, and instead render honor to a man who selflessly ran into a burning vehicle three times to save his soldiers. Not only would the move help the Army to catch up with its sister services who are working to ban Confederate symbols, but it would honor a soldier who embodied everything the service holds dear.

What’s wrong with the current name?

During World War I, a large number of Army installations sprang up across the South to train the massive number of recruits inducted via the draft. One planned installation was an infantry school near Columbus, Georgia. According to the New Georgia Encyclopedia, the United Daughters of the Confederacy asked the Army to name it after Henry Benning.

Benning was an odd choice. Though a Columbus local, Benning never served in the United States Army; rather, he was a large slaveholder who led a walkout of the Southern delegations at the 1860 Democratic convention because the party refused to explicitly support slavery in its platform. This move guaranteed Abraham Lincoln’s election, which the Southerners then used to justify secession. In 1861, Benning was Georgia’s representative to Virginia’s secession convention and explicitly argued that dissolving the Union was the only way to preserve slavery. He fought against the United States for the entirety of his military career, a career which ended in resounding defeat at Petersburg. He is not worthy of a United States military base in his name.

But naming the post after Benning in 1918 was part of a wider effort by white Southerners to falsely depict the Confederacy’s cause as a moral battle for “state’s rights” in the tradition of the “Lost Cause” myth. Decades after the war, according to historians such as Karen Cox, groups including the United Daughters of the Confederacy and the Sons of Confederate Veterans sought to whitewash the main cause of the war: the South’s desire to continue enslaving people of African descent. Their fraudulent account of the war’s causes caught on, and according to the Rotary Club, Benning was considered “a splendid example of patriotic citizenship” rather than a slaveholder with a mixed battlefield record against the United States.

African American service members can see through the façade of the Lost Cause, and have said time and time again that Confederate base names remind them on a daily basis that the Army as an institution continues to honor men who fought to keep their ancestors enslaved. History is relatively clear that naming Fort Benning wasn’t motivated by any celebration of military valor, but a political ploy designed to uphold a false myth of Southern secession.

Renaming Fort Benning is one way that the U.S. military can work to finally break down this myth once and for all.

Cashe was an infantry platoon sergeant in 1st Battalion, 15th Infantry Regiment, 3rd Infantry Division who was based at Fort Benning before deploying to Northern Iraq in 2005. On October 17, his Bradley Fighting Vehicle hit a roadside bomb while on patrol in the city of Samarra. Cashe escaped injury in the initial explosion, but his uniform was soaked in fuel from the vehicle, which then burst into flames.

According to his Silver Star citation, Cashe pulled the driver from the burning vehicle before noticing that several of his soldiers were trapped in the troop compartment. He repeatedly ran back into the inferno — catching his uniform on fire – and pulled his soldiers out, ultimately saving six of them. He received burns over three fourths of his body but refused evacuation until all of the other wounded were loaded.

Cashe died of his wounds three weeks later. His sister told the Los Angeles Times that he regained consciousness in the days before his death and immediately asked, “How are my boys?” Upon hearing that some had died of their wounds, Cashe said, between sobs, that he “couldn’t get to them fast enough.”

Cashe’s battalion commander at the time, now-Maj. Gen. Gary M. Brito (who has commanded Fort Benning since 2018 and will soon promote to lieutenant general), recommended him for the Silver Star upon learning of his actions. But after learning the full extent of his actions that day, Brito launched a campaign to upgrade Cashe’s award to the Medal of Honor. Brito submitted the application in May 2011, and as Adam Linehan reported for Task & Purpose in 2018, “it hasn’t been heard from since.” It still hasn’t, nor has the Army commented on Cashe’s case since since Brito submitted the upgrade request.

Given the rate of valor medal upgrades over the past decade, the failure to upgrade Cashe’s Silver Star — or even state that the upgrade has been denied — is inexplicable. Cashe’s gallant actions that day certainly meet the baseline standard for the medal and exemplify many of the Army’s stated values: duty, selfless service, and personal courage, among others. He deserves more recognition than his current accolades, a Silver Star and the namesake of a local Army Reserve Center in Florida.

Moreover, amid our current national crisis following the death of George Floyd (and 400 years of violence against black Americans), both the Navy and the Marine Corps have committed to banning Confederate flags and icons from their installations. The Air Force’s Inspector General is launching an investigation into how racial injustice affects African American service members. These are meaningful steps to improve the military working environment for those service members, who make up 21 percent of the active duty Army. They’re also likely supported by a majority of Americans: a June 2 national poll conducted by Monmouth University found that 76 percent of respondents consider “racial and ethnic discrimination” a “big problem,” and that 88 percent in total consider discrimination a problem.

The Army — and the National Guard in particular — is also embroiled in a public relations crisis after its highly visible role in what the New York Times described as “the crackdown on mostly peaceful protesters” in the District of Columbia. In addition to the New York Times, Politico also reported on the moral and emotional strain many National Guard service members —particularly those from the D.C. National Guard, which is around 60 percent people of color — experienced while standing across from their neighbors. A viral clip captured one soldier, Spc. Khaled Abdelghany, mouthing “I’m black and I’m proud” along with chanting protestors.

Indeed, the Army is failing to keep pace with its sister services when it comes to eliminating symbols and names that honor the Confederacy, and its black soldiers and their allies feel increasingly marginalized by the military. One soldier even told the New York Times that “he and fellow troops were so ashamed in taking part against the protests that they have kept it from family members.” These soldiers desperately need Army leadership to take meaningful measures to regain their trust and confidence.

It follows, then, that renaming Fort Benning to Fort Cashe would serve the best interests of the Army, especially if done so in conjunction with name changes for other Confederate-named posts and a broader effort to create a better working environment for soldiers of color. It would reassure black soldiers and their allies that the Army is committed to racial justice and equality. It would duly honor Alwyn Cashe, a hero deserving of the Medal of Honor and more. It would right a historical wrong and remove an outdated relic of the Lost Cause impressed upon Americans for more than a century.

Update: The original version of this op-ed stated that the Columbus Rotary Club suggested the name. Although Rotary claims credit today, archival sources reveal that the idea originated with the United Daughters of the Confederacy.